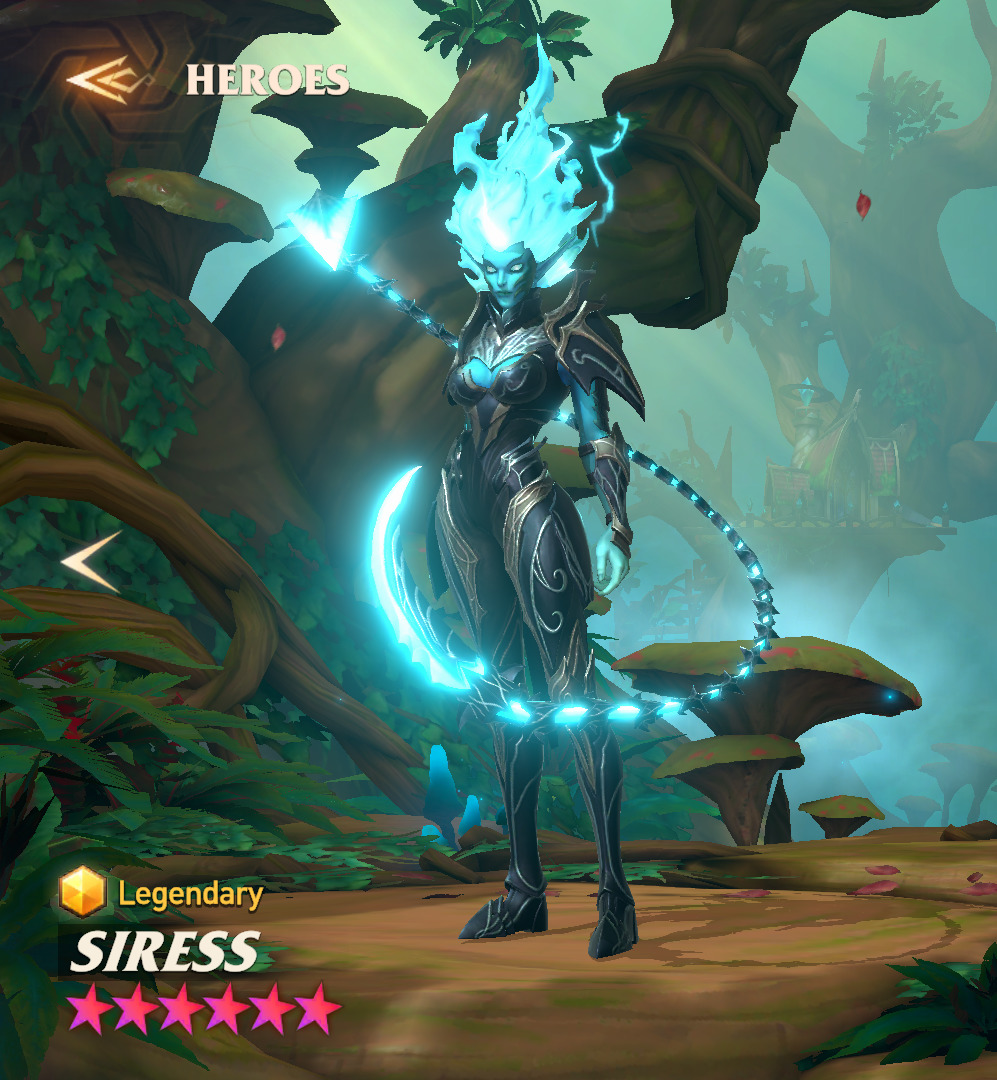 At the end of the 2 turn, this character’s abilities attack 1 extra target, can attack up to four enemies.

At the end of the 1 turn, this character’s abilities attack 1 extra target, can attack up to four enemies.

Deals 100% damage to an enemy and grants Defense Pierce Up to this character for 1 turn(s).

Deals 150% damage to an enemy. For every enemy hit with this ability, grants 1 stack of Ability Immunity for 4 turn(s).

Grants immunity to the next negative effect taken.

Grant this character 50% bonus damage when attacking over an area. Can only be triggered once every 1 round.

Siress is the twin sister of Santis tragically presumed dead after losing her footing over a cliff in the Thunder Valley during a botched attempt to rescue her sister, Santis, from a cell in which she was awaiting execution by the High Elven Court for the use of Dark magic. Santis believes her sister to be deceased, and has held both herself and the High Elves responsible. She is yet to realize that, far from dying, her sister was handily preserved by Dark elven magic and now works as one of their most secretive assassins.

A strict code of silence prevents Siress from revealing her fate to her sister Santis, but she longs for the day where, as the head of the Unholy Citadel herself, she can finally launch an all-out attack against the High Elves, reveal herself to her sister, and take vengeance against their and her sister’s mistreatment.

There is no doubt that Siress is a very powerful dark elf albeit without the allegiances her racial epithet would imply. Unlike her sister Santis, a devotee of the Soulplunder cult, Siress holds little reverence for the Dark One or his powers on account of his numerous failures over the millennia to gain an enduring foothold in Aurelica. To Siress, heady promises of endless life or infinite power associated with these sects pale in comparison to the more enduring promises of self-reliance.

Siress’ philosophy thus conflicts substantially with her sister’s, forcing the two to part ways as Siress – a perpetual loner thanks to her dark elven heritage – seeks ways to strengthen herself against all others. A lengthy exploration in search of ancient, powerful magical artifacts led her at last to an abandoned temple deep in the Jungle of Neftafar containing a sacred alter and a serpentine-shaped sword upon it. Siress became aware immediately after touching the artifact that she may have made a grave mistake as the energies within sprang into her with a power that even she, a lifelong sorcerer, could not control. Siress’ body fell unconscious as her mind entered a perpetual nightmare in which she found herself slowly drowning on a stormy ocean surrounded by never-ending blasts of lightning. In her mind, she imagined that the artifact, perhaps represented by the storm or perhaps by the water, arcing bow after bow of electricity into her drowning body, each one carrying the pain of a thousand Fireburner stings. The water began to suck her deep beneath the waves, but she knew that the enchantment woven around the artifact would take her life if she allowed herself to give up. No! She struggled for air and the chance to take vengeance against all those who had oppressed her.

Weeks passed in this agonizing nightmare, months even. She could not be sure as it appeared to be on a different plane to her mortal body. Eventually, something within her began to absorb the strength of the lightning flashes that arced down upon her defenseless body. She realized the flashes were not punishments from the artifact but individual gifts of power. Siress eventually opened her eyes. She was once again back in the temple under the altar, thirsty, emaciated, starving, sword in hand. She steadied herself and stood up. The sword glowed, and made a full circle before resting once again in her hands: her powers recognized, her strength restored. The only question remaining was what to do next. Siress would need to spend some time in the temple, studying this ancient civilization and the sorceries of whoever had crafted such a weapon. She would need to wield it perfectly for her in the coming battles.