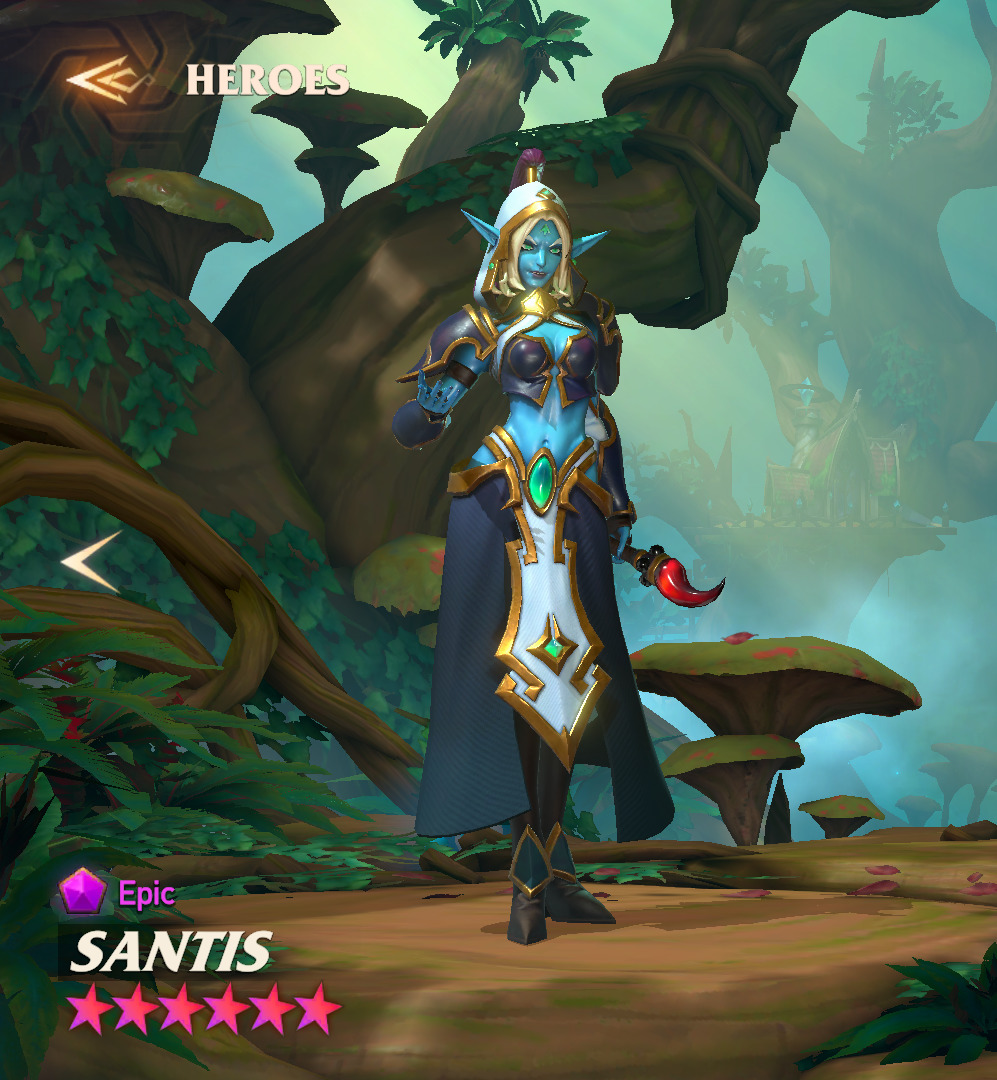 Attacks against enemies affected by Poison have a 50% chance to apply an additional Poison for 2 turn(s).

Attacks against enemies affected by Poison apply an additional Poison for 2 turn(s).

Deals 80% damage to an enemy and applies Poison for 2 turn(s).

Deals 150% damage to an enemy and duplicates all Poison effects affecting them onto another random enemy.

Deals 120% damage to all enemies and applies Poison for 2 turn(s). Prolongs the duration of all Poison effects on enemies by 1 turn(s).

Converts 50% of healing provided into a shield that lasts for 1 turn.

Pair with Gangelo for an increased chance to apply Poison.

The dark elves are an offshoot of the High Elves, formed around a millenia ago as an indirect result of the creeping chaos corruption of Aurelica. A group of elves contaminated themselves with blood magics, a forbidden Chaos school of magic, which led to minor physical alterations in the original elves’ appearances. Their darker tone and the “original sin” of the blood ritual has served to ostracized the dark elves and their descendants from the rest of “High Elven” society, although the two groups still maintain a mostly cordial relationship. Santis is one of the most powerful sorceress amongst the dark elves, but her elite status has rather poisoned her heart and her mind with hatred against the High Elves and what she sees as their false society.

Santis’ anger seeded a deep desire to access the forbidden tomes of chaos magic held within the Astral Tree, but her newfound skills were discovered and punished by sentence of death by the High Elders. Santis’ older sister, Siress, made an ill-fated attempt to break Santis out of her cliffside prison but lost her footing and fell to her death over Thunder Valley. Her sacrifice moved the High Priestess, Mytheasia, with compassion, who argued forcefully for Santis’ life, whom she promised to keep under watch as her own personal assistant. Spared death, Santis received a new existence in the High Priestess personal retinue, but it remains to be seen whether this saving act of kindness will change Santis’ hate-filled heart…

Santis is a cruel and powerful dark elf who possesses what she regards as the strength and the hunger to destroy her hated highborn brethren once and for all. Santis and her sister Siress are members of the fallen elves otherwise known as the dark elves, who, like many of the other “fallen” species in Aurelica, were corrupted by the Dark One and, in the case of the dark elves, by the promise of new magical powers in particular. All dark elves in Aurelica today are descended from the same group of highborn who, thousands of years ago, opened the Chaos Rift in a place that no longer exists as a result – the Phoenix Mountain. Subsequently, the Dark One gifted this group tremendous power and forever corrupted their bloodline.

Santis, Siress her sister, and their parents were forced to flee their makeshift encampment upon its discovery by the elves’ Astral Guard during their late adolescence, after which they saw their parents struck down and killed by the Guard’s arrows although they themselves survived the pursuit. The two sisters swore revenge, but their path for revenge would ultimately take each in very different directions. Siress chose to seek out new civilizations and strange magical artifacts that could perhaps grant her the power to take on the highborn. Santis chose instead to join Soulplunder, who perhaps more than any other sect in Aurelica can claim status as the Dark One’s representatives. Santis’ path to Soulplunder was neither direct nor immediate. A naturally talented mage, Santis like others of her kind is sensitive to the supernatural calls of spirits beyond her mortal plane of existence. Thus Santis was drawn to one of the many rifts in Aurelica allowing a weak connection between the Dark One and our physical space like a moth to a flame. “Souls, souls, give me souls!” Santis’ heard the voice chanting in her ear in both waking hours and in her dreams, driving her onward finally to the ultimate ceremony in which Santis willingly gave her own soul up to the Dark in exchange for tremendous power. She felt the Dark One reach inside and consume her soul’s very essence as he replaced it with his own evil new strength, which took the form of a strange and wondrous set of tentacles giving Santis the ability to consume the souls of others as hers had been. That is, Santis is driven ever onward to consume more souls to make up for the painful absence of her own, forever consumed by ultimate darkness.

Bereft of any joy or ambition except the never-ending consumption of souls, vengeance, or conquest over her personal enemies, Santis is extremely excited by Soulplunder’s coming plan for attack on the Astral Forest and her long-estranged “brethren”.