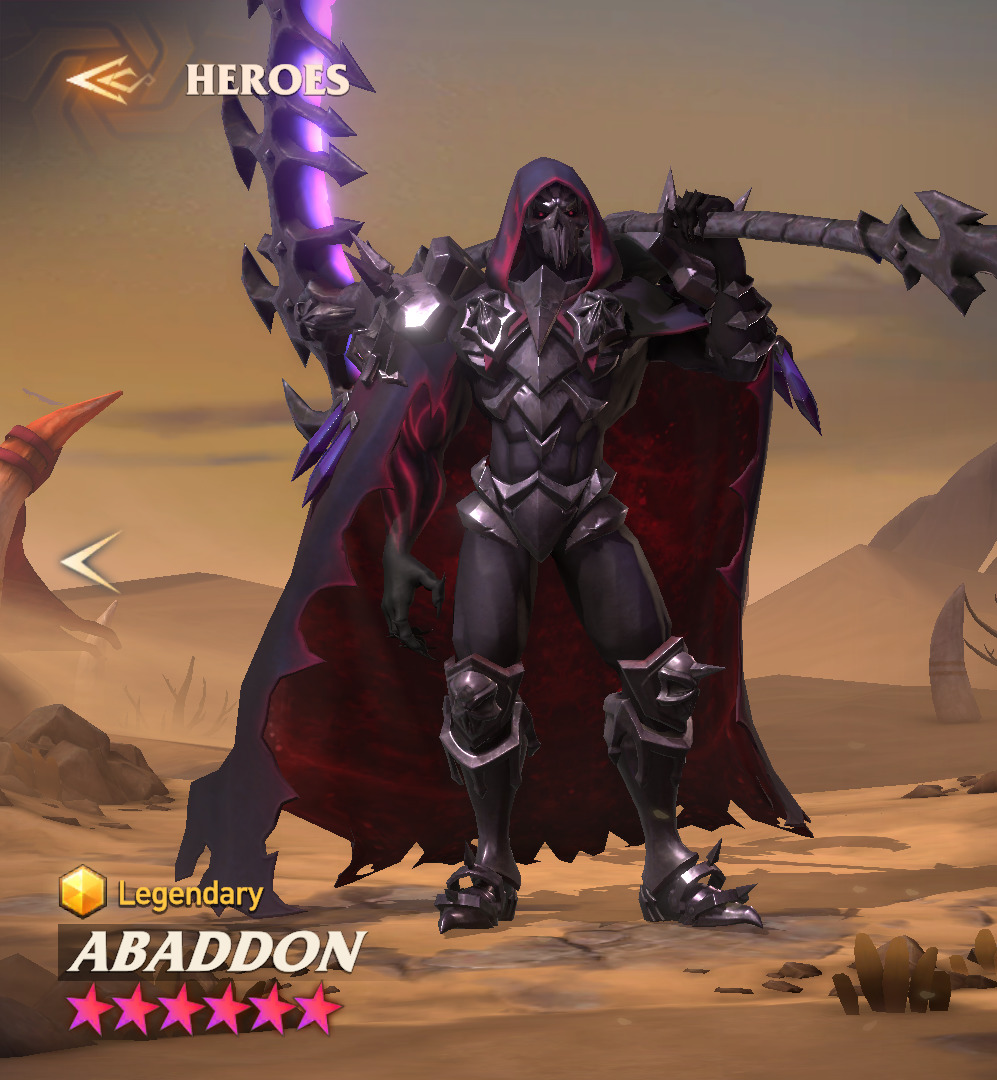 Launches 4 attacks against random enemies, each inflicting 30% damage and Random Stats Down for 2 turn(s).

Attacks trigger a bonus [Soulsuck] strike under 100% Health, dealing 120% damage to all enemies and restoring Health based on the number of negative effects on the target. Cooldown: 3 round(s).

Deals 250% damage to an enemy and prolongs any stat-reduction effects on the target by 1 turn.

The Soulplunder cult began with a mysterious group of darkness worshippers who devoted their souls to chaos in exchange for power and long life. Today, the Soulplunders wear black hooded robes and wield demon-enchanted scythes to absorb the life force of their enemies. The most fearsome of these demonic scythes is the “Soulreaper” wielded by Abaddon himself, the Vanguard of Death, the Avatar of Doom. The blade glimmers with a strange, ethereal light, and Abaddon grows stronger with every soul he reaps with it.

When people tell stories of the legendary companions of the Holy King, perhaps the first member of his inner circle to come to mind is the Great Archmage Micah, who fashioned the legendary enchantments on his holy tomb, or perhaps the now cursed black dragon Agulis, flying high in the sky? Fewer commoners will be aware of his other trusted aide, Abaddon who Dwells in Darkness a terrifying figure wielding a grim reaper’s scythe who often struck fear into the hearts of the King’s enemies.

If we can say the Holy King brought the True Light to Lasir, then Abaddon did the same from the shadows, removing Carlos’ enemies and clearing obstacles away so that his greater purpose could be fulfilled. As Abaddon said himself, he moved among the people like a reaper during those heady days when Carlos was founding his kingdom, enabling Carlos’ plans by the terror he would inspire. Abaddon’s own identity and past have likewise been concealed in darkness, behind the black armor and gruesome mask with which he shields his face or choice of weapon in combat.

Perhaps only those who have tasted of the true terror of the Dark One can appreciate the lengths that Carlos felt he had to go to in order to protect the people from this apocalyptic, world-ending threat, no matter the human cost. Times were certainly different then. The Dark ran rampant through Aurelica, turning men into beasts with all the unstoppable motion of a tidal wave. Abaddon, a pious priest in the service of the Goddess, had taken refuge with some of his people in her chapel and, while praying for protection, came face to face with the power of the Dark’s servants who began massacring his companions. He struggled valiantly with his loyal band of clerics, and had almost fallen when Carlos and his disciplined soldiers arrived.

Abaddon’s prayers had been answered in miraculous fashion, from which point he began to see Carlos as a kind of Son of the Light held aloft by the Goddess. So great was Abaddon’s devotion to the Goddess and her “Anointed One” that his faith remained even throughout the less than noble acts the Holy King took in defense of his Kingdom – murder, execution, and blackmail were seen as necessary to uphold the fraying civil and social order. Abaddon served without complaint as one of Carlos’ most trusted right-hand men behind the shadows, a man of faith to a Holy King who had none, as Carlos often said: “The Goddess may not save us. We have to rely on ourselves, and that is exactly the kingdom I’m going to be building for them.” Carlos’ increasing ruthlessness as king was met and matched by Abaddon’s dark presence behind the scenes “for the greater good.”