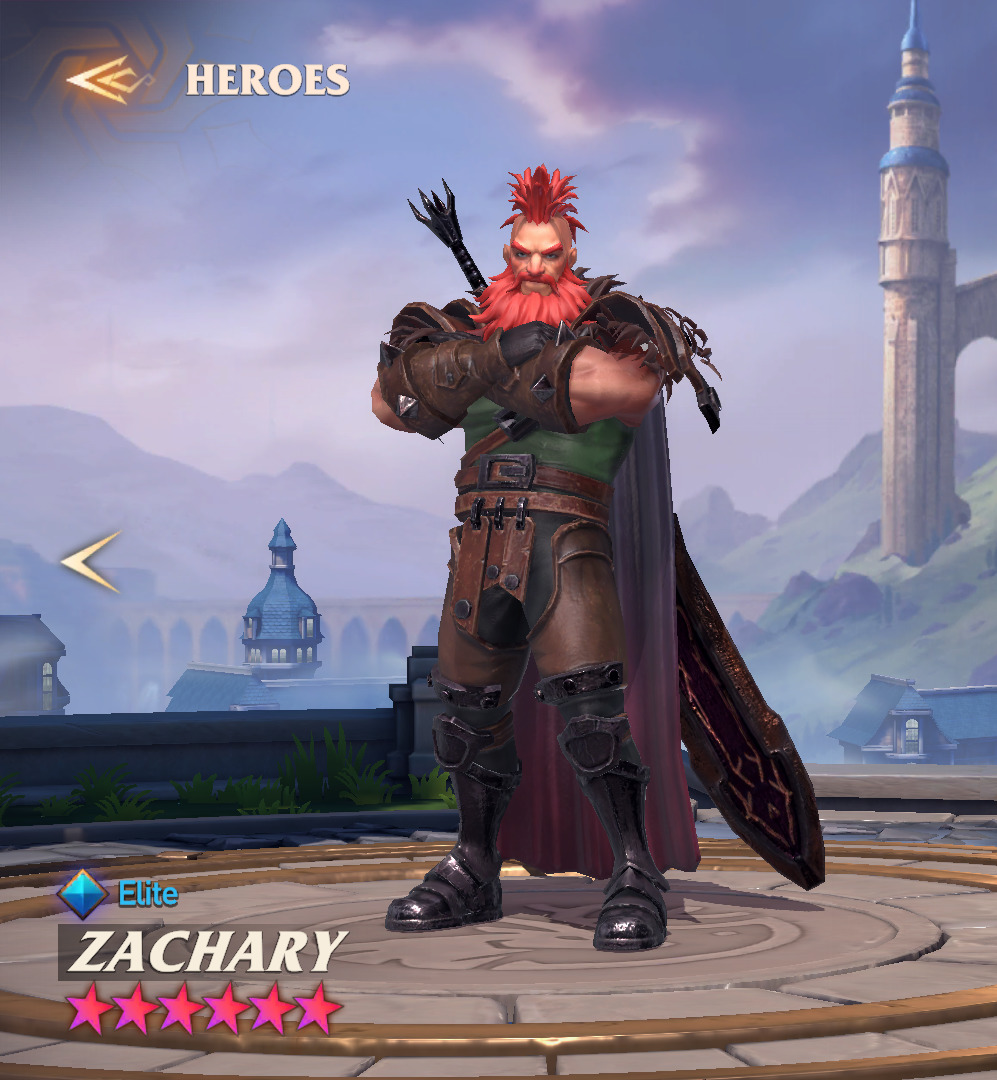 Deals 50% damage to all enemies in a bonus attack when this character or a team member defeats an enemy. This ability may only be triggered once per turn for ally kills, but any number of times for this character’s kills.

Deals 80% damage to all enemies in a bonus attack when this character or a team member defeats an enemy. This ability may only be triggered once per turn for ally kills, but any number of times for this character’s kills.

Deals 100% damage to an enemy and grants Attack Up to this character for 1 turn(s).

Deals 150% damage to an enemy, plus 50% bonus damage if the target has less than 50% of Max Health remaining.

Deals 150% damage to all enemies. The fewer the enemies, the more damage this attack deals.

Zachary: wandering warrior, swordmaster extraordinaire and a figure of great note across Aurelica. Zachary’s relatively humble beginnings can be traced back to a tribe of “Snow Savages” living on the Titan Icelands steppes. A famine prompted Zachary to head for greener pastures at the age of 12, and his keen survival skills soon attracted the attention of Imperial recruiters, who made him a junior member of the Imperial Guard and then a commander, and contemporary of Thomas, on account of his many strategic insights. Zachary scandalously quit the Guard and left the Empire for reasons that, if known, are at the very least not common knowledge.

Zachary next turned up in the public eye fighting in the Bloody Arena of Crisas of all places, as the “red-headed warrior” who soon unseated the Arena’s reigning champion, “Helmar the Berserker”. Zachary’s next foray into controversy came two years later when he helped his friend and fellow gladiator Urzag, a slave of the Arena, to freedom.

Zachary turned up again eight months later as a captain in the Lasir Dukesguard. Zachary’s second stint in the army was also somewhat short lived. Zachary forged an unlikely friendship with Calienna, the Duke’s concubine, on a mission to escort her to the Imperial City and on account of which he found himself unexpectedly given the care of her daughter, Evelyn, just before the consort’s death under suspicious circumstances. Uncertain of who to trust amid his growing unease with the Imperial hierarchy, Zachary roamed the smaller cities on the outskirts of the Empire for a number of years with Evelyn, evading any attempts by the Imperial Guard to recapture the Duke’s daughter until the pair were finally granted a writ of safe passage by Emperor Leo I.

Zachary returned to the life of a wandering warrior after entrusting Evelyn into Yolanda’s care, but could never settle down in one place in or locate the savages from whom he had fled so many years ago. Although Zachary’s present life has made it all but impossible for him to marry, he is a surprisingly tender- hearted man, and has adopted a boy he found abandoned in the wilderness named “Elson”. The financial demands of his new ward has also forced Zachary to offer his services as probably the most expensive mercenary in all of Aurelica, but this is in no way to imply that he is driven by greed. As all Aurelica knows, Zachary is more than willing to defend someone against injustice with a token sum of gold and, much more importantly, fine liquor.

Along, long time ago, before the legend of Zachary the red-whiskered happy-go-lucky sword-wielding wandering Warrior extraordinaire and his adventures had been firmly ensconced in the people’s hearts, Zachary was but a humble Snow Savages youth hailing from the inhospitable northern steppes. Hard-bitten at a young age by the adventure bug, the irrepressible Zachary left his home for warmer climes as a solo adventurer with naught but a sword in hand and backpack on his shoulders ready to land wherever the wind took him.

Zachary’s first decade in the territories around the Empire and Free Cities was spent profitably as a mercenary in the service of a local noble, but it was one mission in particular – to quell a potential threat lurking within a cursed city considered too dangerous for the rank and file soldiery – that Zachary obtained what is now regarded as his signature weapon: the Chaos Blade, a dubious relic he was allowed to keep owing to the finer points of the law on salvaging and the disinterest of his mercenary bondkeeper in reclaiming the dangerous-looking magical artifact. Unfortunately, the now 30-year old Zachary had found himself in the possession of a powerful magical artifact contaminated by the Dark and, as such, it plunged his life into a series of missteps, ill-fated romances, and ill-timed accidents one after the other until Zachary realized that the Blade was actively cursing whoever came into close contact with its unwelcome owner.

Zachary struggled mightily with the dual curse and blessing the Blade presented: invincibility in battle, yet a life touched by darkness and unhappiness. Unable to free himself from the Blade’s influence and its attractions, Zachary abandoned his former mercenary brothers and fell into the lonely life of a wandering dissolute, a frequent patron of seedy taverns and bars in the Free Cities in possession of a sword that grew more and more powerful at the expense of its owner’s joy. Zachary reached an absolute low point when he volunteered himself for the Bloody Arena in Crisas, a rare free gladiator with actual military experience and without a host of debts to repay from participation in this most dangerous of contests, and the red-headed Zachary soon found, thanks to his Chaos Blade, very few opponents willing to meet his challenge. It was in the Arena that the free-man, Zachary, developed an unlikely friendship with the virtually slave-born Urzag whose plight rekindled some compassion in the dissolute’s heart. But the tale of the exploits are not be told here. Suffice to say, that Zachary actually learned to tame the dark energies within the Chaos Blade even as an untrained magical user.

It may even be the repeated exposure to the energies of the Dark has even conveyed a kind of “immunity” to this warrior of many sorrows, and may perhaps explain why he was chosen years later as a personal bodyguard to the Duke of Lasir’s consort Sylvia, entrusted with the dangerous task of escorting her on frequent trips to and from the Imperial city and the capricious Imperial Court. The royal consort suffered even worse luck than her bodyguard and died an untimely death, yet not before she was able to entrust the guardianship of her daughter Evelyn into Zachary’s hands, whom he was instructed to protect until the great mage Yolanda could be located somewhere in the Free Cities. Thus Zachary did, evading the imperial patrols and outstanding warrants from the capricious Emperor and her jealous princess for 3 years in the meantime.

Zachary afterward headed back to his hometown on the northern steppes to begin a new phase of his life, during which accumulated yet another young ward to his name who he called Elson, a baby boy raised for some months by a local pack of wolves after his parents were presumably murdered. Zachary formally adopted the boy in order to leave him in the care of the Snow Savages. Zachary may in some sense now be considered an adopted father to two children: Elson and Evelyn, with whom the unlikely father has also developed a paternal bond. Zachary now splits his time between looking after Evelyn the Free Cities and checking in on Elson’s welfare in between his various adventures and bouts of derring-do.