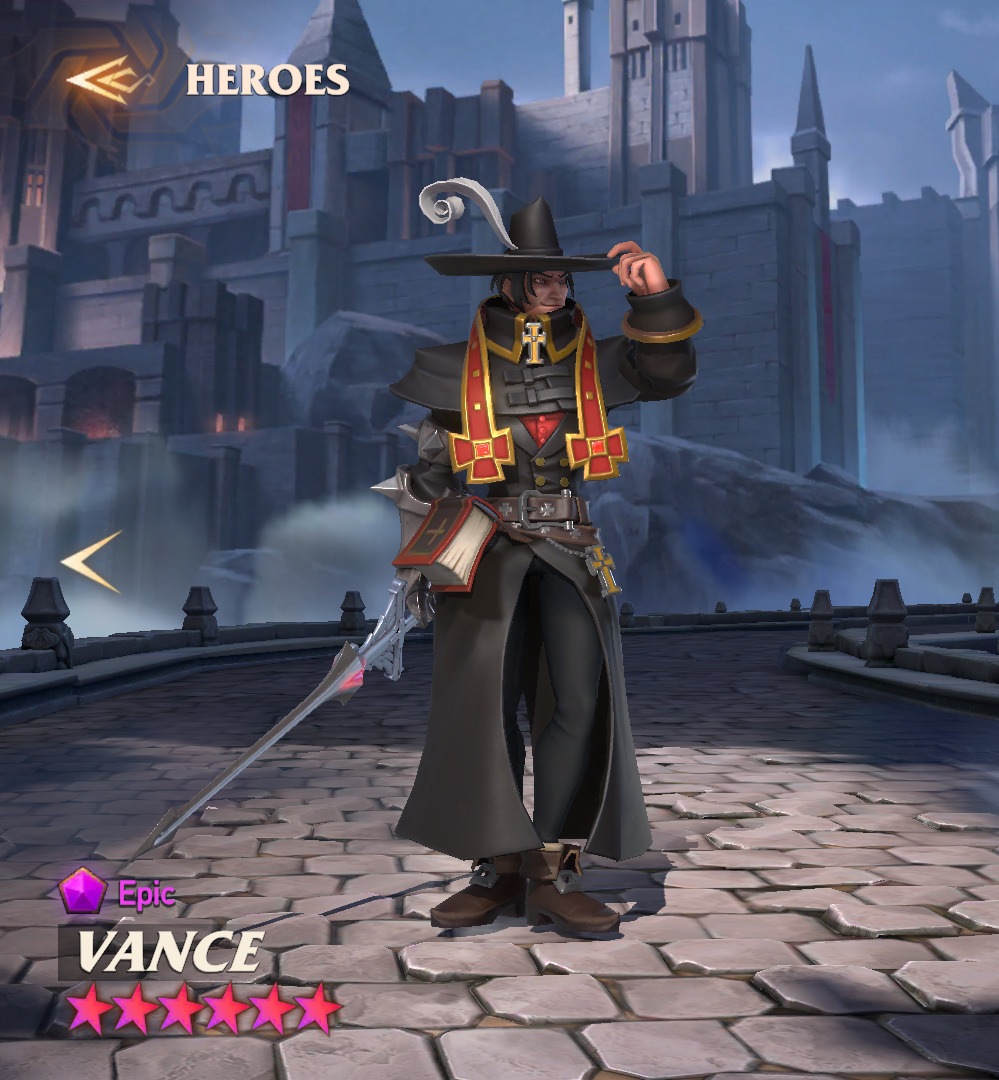 Grants a bonus turn upon reaching 5 Rage as well as 1 Rage per positive effect applied to a non-boss enemy.

Grants a bonus turn upon reaching 5 Rage as well as 1 Rage per positive effect applied to a non-boss enemy. Attacks ignore Defense Up, Damage Reduction or Shield on the target.

Deals 120% damage to an enemy plus a bonus attack with [Inquisition] if the target is affected by more than 2 positive effects.

Deals 120% damage to an enemy and duplicates all of their positive effects onto this character.

Restores 16% of Max Health that scales with Rage and grants Undying upon taking massive damage. Can be triggered only once per 3 round(s).

Deals 200% damage to an enemy. Damage increases by 30% for every positive effect on the enemy.

Vance grew up in the loveless home of his uncle, bereft of a mother from childbirth and a father who died from a witch’s black magic during an unsuccessful arrest attempt. Vance quickly learned to love his own company in response to the jealous rage he suffered daily at the hands of his step-aunt, which he then expressed in the abuse of smaller animals weaker than himself.

Vance grew up a confident swordsman, but ineligible for the Royal Cavalry thanks to his poor family background. He turned to the Order of Clerics instead. A hard-nosed sceptic, Vance was clearly inappropriate for any type of religious order, but found a much more suitable calling in an alternative combat-focused branch: the Witch Hunters. The Witch Hunters provided Vance with effectively his dream job: the task of hunting down witches throughout the Empire and sometimes further afield with his cross-shaped sword and clerical spells. Vance earned considerable notoriety as a sadistic Witch Hunter, but even this claim to fame has been utterly surpassed in recent years by the terrifying but beautiful Archcleric, Valeria.

Vance was instantly smitten by Her Holiness and has hung onto Valeria’s every word ever since. As one of the few individuals in Aurelica to learn of Valeria’s true allegiances when presented with a demon-enchanted sword from his clerical master, Vance is long past caring for Valeria’s intentions toward the Order, Empire, or how she came into the possession of such artifacts. In Vance’s eyes, Valeria is more akin to a goddess than a mere mortal, and he is willing to do whatever it takes – even sacrifice the kingdoms of humanity – to please his temptress.

Today the most feared inquisitor in what is regarded as perhaps the darkest and most shadowy branch of the Order of the Sacred Fire, Vance’s natural character flaws and inherent cruelty has been much aided and abetted by the loveless home of his childhood that he was forced to endure after his mother perished in childbirth and his knight father in the execution of a difficult arrest warrant on a member of the Soulplunder cult. Vance quickly learned to love his own company and bar himself from the expression of emotion in response to the jealous rage he suffered at the hands of his step-aunt, which he then expressed in the abuse of small animals weaker than himself, none of which proved to make him particularly popular.

Vance’s withdrawn demeanor and unpopular social standing made admission to the Order of Knights impossible, a blow somewhat ameliorated by his uncle’s successful effort to introduce Vance to the order of the Sacred Fire of Lasir through his connections, a decent enough career that was hoped might instill some great sense of brotherly love in the angry young man. A hardnosed skeptic, Vance was clearly inappropriate for any type of religious order, but found a much more suitable calling in an alternative and much less empathetic branch of the order: the Inquisitoriat.

Membership in the Inquisitoriat provided Vance with what amounted effectively to his dream job: the chance to try his imagination at the kaleidoscope of punishments that could be inflicted upon the Dark One’s followers on the torture rack. Vance was thrilled to find himself graduating from the torture of small animals to the torture of cultists, a rather strange passion that further isolated Vance from the rest of of polite society and even from his own inquisitors. Vance’s cruel predilections were tolerated because, as others in the Order were fond of saying, the light sometimes needs bad men to fight the Dark. The appointment of the new Archcleric over the entire order, Valeria, immediately filled Vance with a sense of trepidation at the fear that this elegant, angelic-seeming lady would discontinue Vance’s line of work and perhaps even boot Vance and his fellow inquisitors out of the order entirely.

Vance’s concerns turn out to be utterly unfounded. On the contrary, Vance was himself repulsed and excited in equal measure by the cruel imaginations of his new boss in her exhibitionist displays of torture, and quickly learned to recognize the Archcleric had exactly the same passions for inflicting suffering on others that he himself had. Vance’s loyalty towards, then obsession and then a kind of twisted love for Valeria culminated in Valeria’s astonishing gift of a Dark- enchanted sword to Vance – designed to keep Vance alive in circumstances where his somewhat lacking combat abilities might be overmatched. Vance was obviously long past caring for Valeria’s true intentions to the Order, Lasir, how she came into possession of such artifacts, or even her apparent Dark allegiance. In Vance’s eyes, Valeria is more akin to a goddess than a mortal, and he will do whatever it takes – even sacrifice the kingdoms of humanity and Aurelica – to please his temptress.