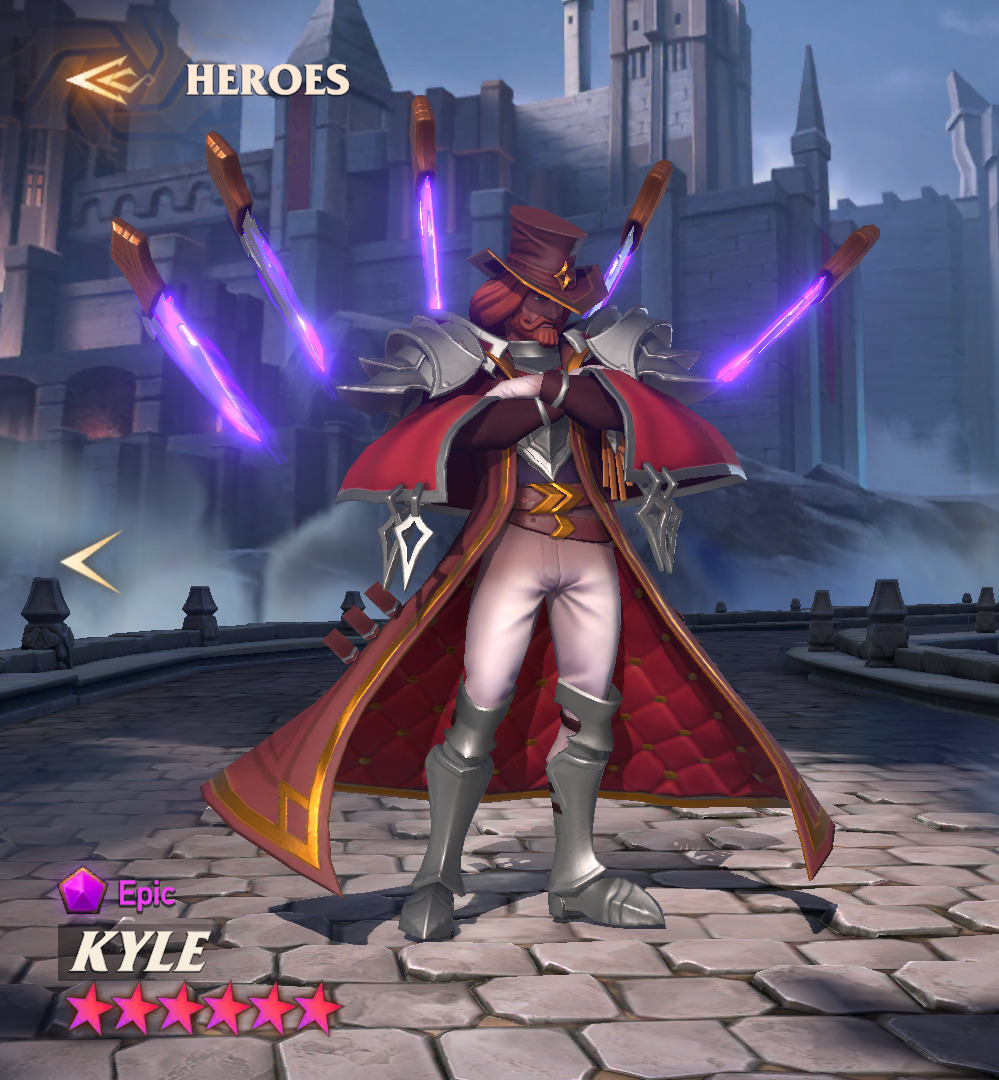 Attacks on this character reduce the cooldown on their ultimate by 1 turn(s). Can only be triggered once per round.

Attacks on this character reduce the cooldown on their ultimate ability by 1 turn(s).

Counterattacks when attacked, dealing 50% damage, with a 30% chance to apply Silence for 1 turn(s).

Shapeshifts into the targeted enemy for 2 turn(s). Immediately grants 1 bonus turn, plus another turn at the end of the round. This shapeshift does not work against bosses or elite units.

This character has a 30% chance to launch a counterattack with their basic attack.

Kyle holds the morally ambiguous position of Spymaster of Lasir under Duke Nicklaus, charged with rooting out sedition or disloyalty throughout the Dukedom before such movements have a chance to gain any traction. Kyle earned his stripes working for a group of shadowy information brokers called the “Chameleon”, who were particularly active during the reign of Holy King Carlos and frequently employed by the Imperium for blackmail, sabotage, assassination, and other such acts not fit for the light of day, and for which the organization was well-rewarded by the Imperial coffers.

Indeed, its founder, Master Bottlin, was one of the Holy King Carlos’ closest aides, a ruler well aware of the vital importance of intelligence on the field of war, and whose intelligence efforts greatly helped to expand the Empire’s borders in these early days. The death of the Holy King plunged Lasir into dire straits, and Bottlin became acutely aware of just how vulnerable his organization could become without the Emperor’s protective umbrella. Bottlin helped to disband his own organization and fled under cover of night, only to return many years later following the establishment of the succeeding Hirschbuck Empire, with whose aristocracy he soon ingratiated himself with Chameleon’s old suite of intelligence services.

Bottlin recruited Kyle around this time, who quickly rose through the ranks. As ambitious as his mentor, Kyle hungered for a seat at the banqueting table of power rather than the life of a mere information broker, and soon found an opportunity to gain the ear of Duke Nicklaus, one of the Holy King’s descendants, following the “Orcish Incident”. Kyle’s excellent work in tracing the origins of the incident back to a group of Soulplunder cultists gained the attention and then patronage of the Duke, who quickly recognized Kyle’s unusual talents with a new position at the head of his own spy ring.

General Kyle began life on the street, surviving on odd jobs and scraps of kindness until his association with a former spymaster in the “Chameleons” brought a much more lucrative trade to his doorstep. The “Chameleons” often recruited from commoners such as Kyle to serve as the eyes and ears of the reigning monarch. The organization was, while not exactly honorable, at least possessed of a remarkable pedigree having been founded during the time of the Holy King Carlos and was known to serve the Crown in all manner of unsavory work, including executions, blackmail and spying on the noble houses.

The rise of the Hirschbuck Empire and subsequent defeat of the Kingdom of Lasir as an independent power effectively wiped out the organization for a brief period until a new generation of young talent took over the reins. Kyle, the right man at the right time, was able to work his way up quickly through the newly recreated organization. Life on the street has ingrained a certain street-smart selfishness into Kyle’s decisions. Now much more advanced in years, Kyle’s new vantage point as a relative insider has softened his harder edges. Indeed, Kyle has come to genuinely appreciate and even believe in the duke’s grand plan on behalf of his people and Lasir…