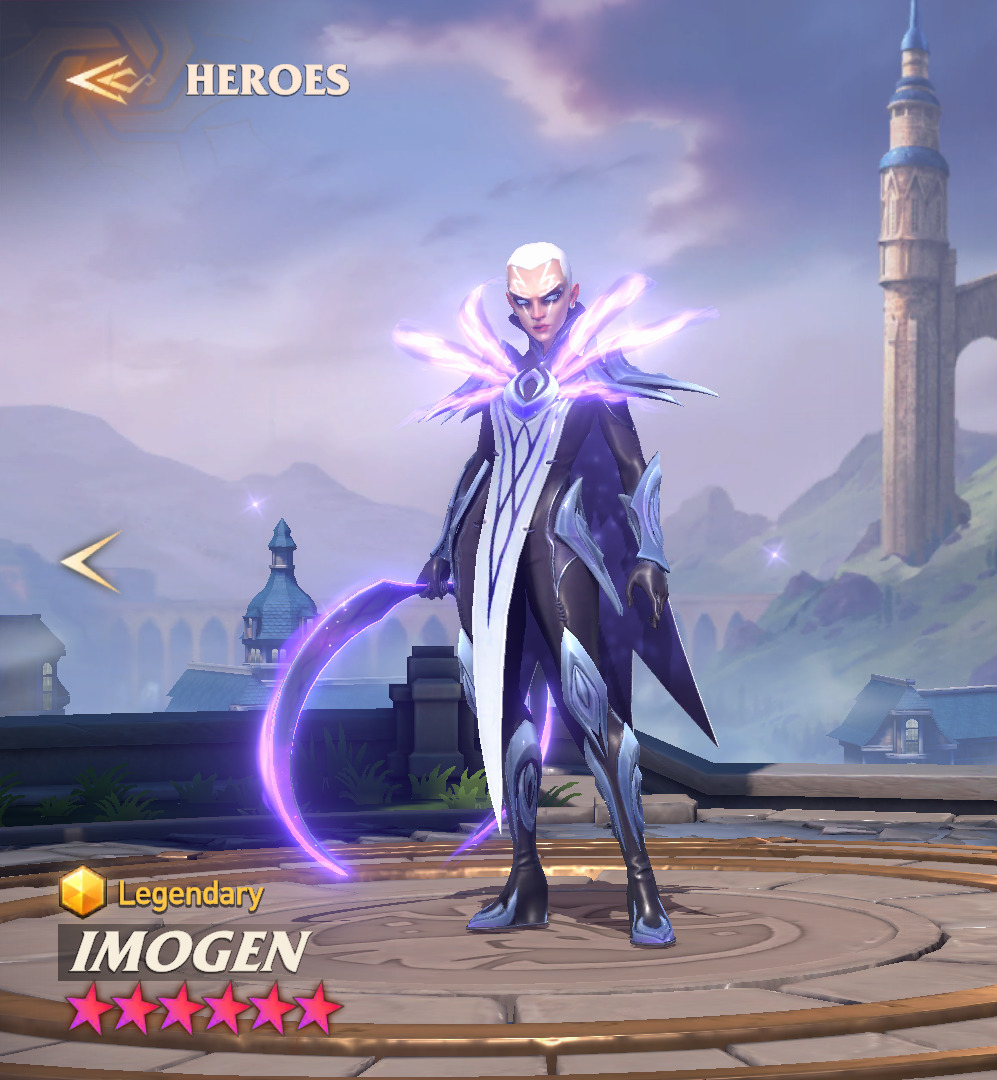 Applies 2 Moonlight at the beginning of the round. Grants this character an unremovable Moonlight upon receiving an Defense Pierce Up. Max 20 stacks.

Applies 3 Moonlight at the beginning of the round. Grants 1 Moonlight upon any out-of-turn Ally’s attack. Grants this character an unremovable Defense Pierce Up upon receiving a Moonlight. Max 20 stacks.

Deals 100% damage to an enemy and grants 1 Moonlight. +1 Moonlight and +30% Damage per Critical Strike.

Applies 2 Moonlight to this character, deals 150 % damage and removes 1 positive effect from all enemies. Each successful removal grants 2 extra Moonlight and deals +30% damage to the main target.

Orphaned in her infancy, Imogen was raised the daughter of Gloria Runestar, a powerful sorceress who attempted to impart some of her magical knowledge and wisdom to the growing child. Imogen’s mysterious past and the unknown identity of her parents began to gnaw at her in her adolescence as she realized the Imperium and her adopted mother were not being entirely truthful about her origins, and the teenager became increasingly quiet and withdrawn as she searched desperately for answers. The truth is that Imogen’s birth parents, Basil Windsight and the Dark Bride Erawin, were prominent members of the Soulplunder cult. The Imperium ruthlessly crushed Soulplunder’s first major rebellion instigated under the leadership of Ciara Plaguebringer, many of whose followers fled to the Free Cities and were there hunted down and killed by the Holy Citadel Archmage Edicris. Imogen’s father died in battle against the Citadel trying to protect her mother, who was herself seized and then executed soon afterwards. Basil’s famous relic, the Windsight, was presumed lost.

Ciara rebuilt Soulplunder’s strength in the ensuing years, founding new chapters in different settlements. Once her forces had regained considerable strength, Ciara acted on a tip-off that the Windsight had been stashed away in a privately-owned, heavily armed treasure vault in the Free Cities. The relic recovered, Ciara then personally sought out Imogen and presented it along with the truth of her background and her enormous potential for dark sorcery. Imogen’s mind was soon enticed by the irresistible draw of nearly unlimited Dark power.

The truth about her parents’ murder, their identities as prominent members of Soulplunder, Gloria’s deceptions, and her natural affinity for Dark magic destroyed whatever semblance of self- restraint Gloria had carefully inculcated in the young girl over many years, who lashed out at her adopted mother and against the false “Light” school of magic before fleeing from the Free Cities in search of a new life with Ciara. Imogen is now driven by two main desires: her hatred of the so-called Light and its falsity, and the desire to continue her parent’s legacy as Soulplunder’s “Windsight Terror”.

There is little doubt the new Queen of Talin could not have carried out so many impressive reforms were it not for the backing of her close friend Imogen, a Lunar Blademaster in the ancient ways and fellow descendant of Talin’s founders, and who worked behind the scenes to shore up her Tia’s powerbase. Imogen’s devotion to her queen is not without hesitation, however. As a disciple of the Lunar Blades, Imogen is well-aware of the story of the oath sworn by the first Lunar Blademaster with Queen Anna Animalaya to create a matriarchal society characterized by female empowerment. So the story goes that Talin’s founding as a matriarchy in Aurelica’s northeast was written into its founding moment.

Imogen differs from her queen substantially in temperament also, the coldness of years of harsh training in the Lunar Blademasters having tempered her propensity to smile, displayed particularly against Tia’s ebullient positivity. After all, Talinese folk myths have always held a special connection exists between the definitively female Goddess of the Moon and those women called into the rigorous life of a Lunar Blademaster, a profession said to be inaccessible to all men who lack the blessings of the matriarchal Lunar Goddess. There is no doubt that some strange sorcery is at play as this mysterious order of female ninjas can seemingly annihilate powerful enemies with odd, moon-shaped blades. Female empowerment is as much a source of pride as responsibility to the traditionalist Lunar Blademasters responsible in large part for Talin’s safety over the centuries.

It was Imogen perhaps more than any other of the new queen’s closest aides and advisors who worked behind the scenes to ensure her friend’s hold on power remained intact throughout her titanic reformations of Talinese society. A traditionalist at heart and representative of a highly traditional organization, Imogen could not disguise her growing discomfort with Tia’s pace of reform, nor her organization’s founding mission to ensure Talin’s matriarchy. Unlike some of her brethren, Imogen does however recognize that certain aspects of Talinese society needs to change, and supports and respects her queen’s desire to do so. Unfortunately, Imogen’s doubts have only continued to grow as Talinese society grows increasingly unrecognizable to many of their elders and similar to surrounding cities.