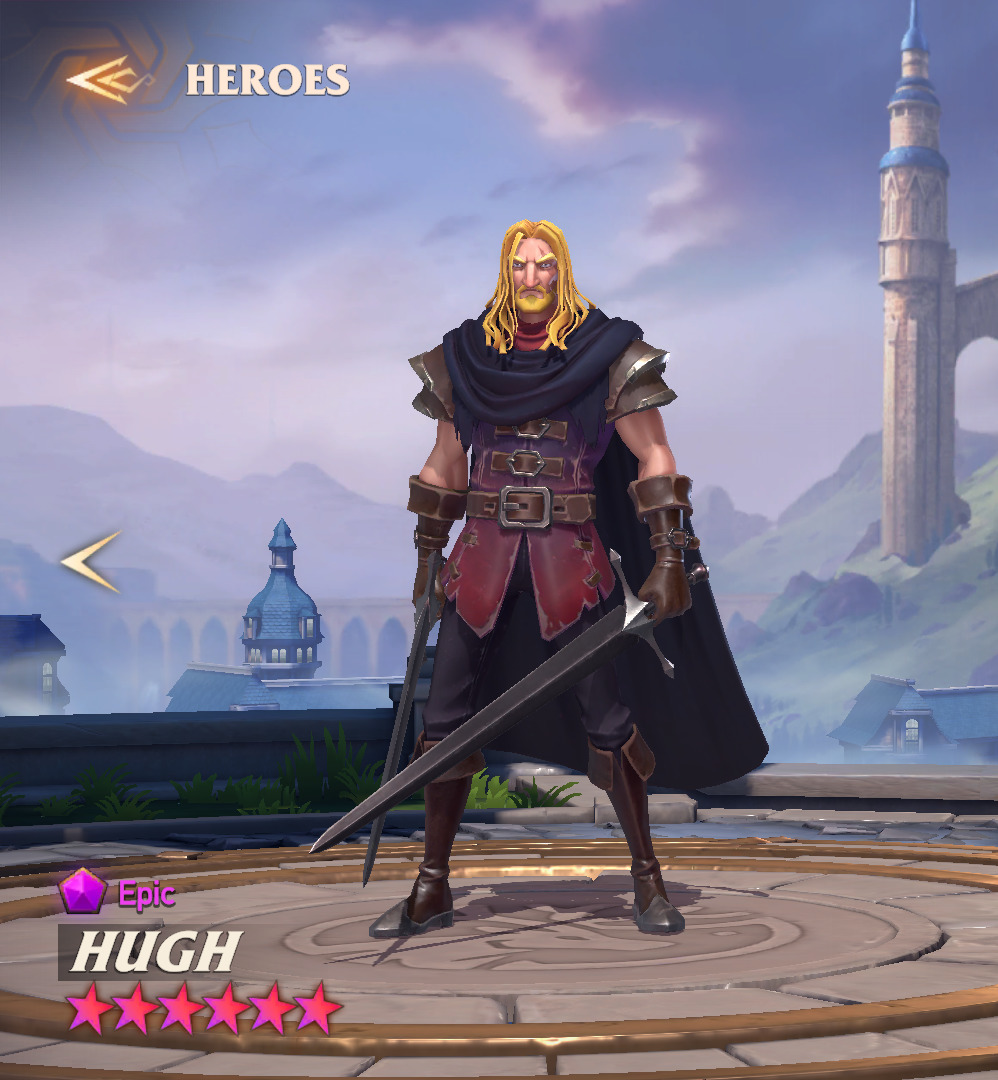 50% chance to launch a counterattack with a basic ability against any slower enemy’s use of any skill.

100% chance to launch a counterattack with a basic ability against any slower enemy’s use of  any skill.

Deals 100% damage to an enemy. Damage scales with this character’s Speed.

Deals 200% damage to an enemy. If the enemy’s Speed is lower than this character’s Speed, then grants Damage Reduction and ignores 50% of the enemy’s Defense for 2 turn(s).

Pair with Tia to significantly increase the frequency of counterattack triggers.

Hugh Humphrys’ life has been full of fighting, which has shown him many victories – as well as defeats. Through his challenges, he has learned and grown, working hard to make up for his struggles. Hugh’s dream is to win the competition and become the best swordsman in the world. Though Hugh is greatly talented, he is also quite full of bad luck. Born to an average family within the Empire, he became a famous swordsman in his hometown at a young age.

Fifteen years ago, the young Hugh traveled to the capital of the Empire from his countryside village for the first time. He had ventured this distance to participate in the five-year competition, though at that time, Hugh’s bad luck struck again. In the qualifiers, he met Renault – the strongest swordsman around. Sir Z, the sword Hugh’s tough opponent wielded, lived up to it’s name, the “Dragon Flame” when it burst into raging flames. The heat of the flames caught Hugh by surprise, leaving him unable to gather his strength, leading him to an embarrassing defeat. “Although magical swords are powerful, they are not suitable for me. As long as I practice my dueling, I will defeat him.” For five years, Hugh trained himself every day and night, eventually returning to the competition.

Here, he met Zachary, who wielded a powerful sword. Hugh tried his best, but was unable to beat Zachary, resulting in another devastating loss. He spent another five years preparing, and was now more skilled than ever before. Riding high on his newfound confidence, he became careless in his attacks, resulting in a missed attack that killed his opponent – the son of the Chancellor of Finance. Following this, he has escaped and resides in the Sambala Islands, where he looks to become a master swordsmith.

Hugh spent his adolescence years practicing swordsmanship and squiring for some of the best knights of Lasir. This, combined with his natural talent, soon earned him the nickname “Windwalker” for his incredible speed with the blade. A frequent combatant at jousts and duels, Hugh formed a reasonably close friendship with the great sword-wielding Zachary throughout their frequent associations at various sparring events. The friends have taken very different paths in life, however.

A patriot, Hugh was quick to enlist in the Duke’s Guard under Nicklaus, and quickly ascended to the rank of Commander of the Guard in recognition of his many talents, both on and off the field. Hugh’s deep admiration for the duke has turned to horror by slow degrees in light of his seeming Faustian bargain for power at the expense of the Light. Loyal to a fault, the encroaching darkness at the heart of Lasir’s strange new court may force Hugh into an unimaginable new course of action…