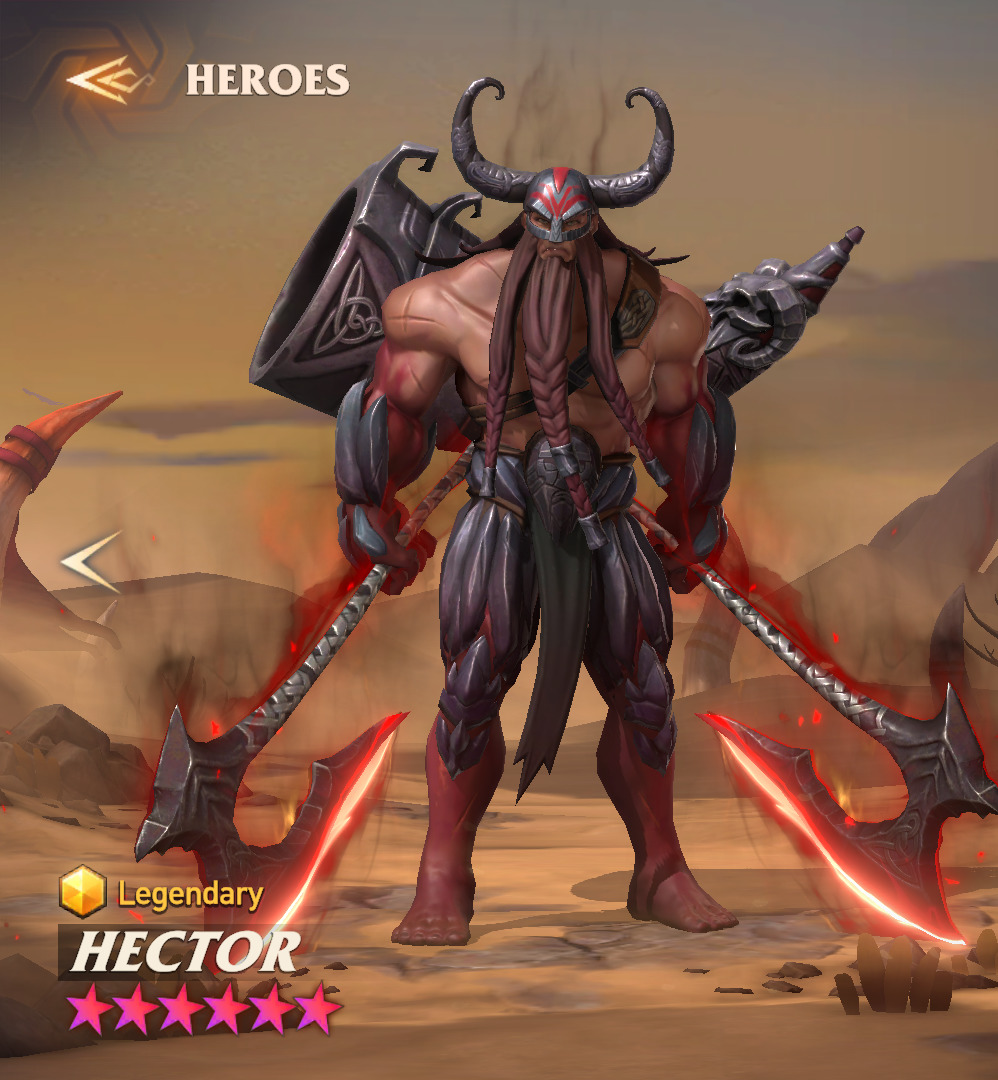 Applies 1 Damage Up II and then deals 100% damage to an enemy.

Recalls all thrown axes, deals 200% damage to an enemy, and grants 1 bonus turn for every axe.

Hector is a former Keeper of the Peace of his hometown of Bilton who, due to a blundered mission that virtually destroyed the town, has exiled himself and adopt a life of a wandering warrior to soothe his guilty conscience. A man beyond the law of humanity, but not the law of his own heart, Hector still roams the barren deserts of Crisas seeking opportunities to play the hero and take revenge on those responsible for Bilton’s near-destruction.

Hector’s old life in Bilton was defined by his close friendship with fellow officer Chalcedon, his Assistant Keeper and certainlv the more measured of the two. The pair worked tirelessly during those early years to fend off raids from various non-human species sharing the desert with the human settlements, a process that lead Hector to develop a mastery of his fabled two-handed swordsman technique. The surrounding area could have been a relatively safe place for Bilton’s townsfolk were it not for the goblins and their crafty leader, Gubeg, who made a habit of harassing Hector and the other city defenders at every turn. Hector took the goblins’ unprovoked attacks personally and, in a fit of vengeance, affixed the bloody heads of goblin warriors atop the city wall as a challenge to any would-be aspirants’ to the town’s treasures. Hector, in so doing, had dangerously miscalculated his rival’s intelligence and patience, and neither did this provocation against the goblin leader go unnoticed by the anxious townsfolk.

The crafty Chieftain Gubeg responded by attacking Bilton himself, but then quickly retreated. The prospect of capturing the Goblin leader drew Hector and many of the other young men of Bilton out in pursuit. Gubeg led Hector’s army straight into a cavern filled with manters, including his manter pet, Horace. The more cautious Chalcedon attempted to persuade Hector to turn back and not to enter the caves, but the foolhardy warrior refused to tolerate any such talk that smacked of “cowardice”. Hector’s force entered the cave and sprang the trap. Dozens of manters descended on the relatively helpless young men with fangs drawn, each tooth holding enough poison to kill a battalion of troops. Hector’s blademastery preserved him from harm, but none of the others apart from Chalcedon survived the cave, and Chalcedon only because Hector, acting quickly, severed his arm to prevent the poison from spreading. Hector trekked back to Bilton carrying his amputated friend on his back, but did not receive the welcome he had hoped for. The crafty goblins had taken advantage of the city defenders’ absence by ransacking the town and putting many of its inhabitants to the sword. Hector, realizing his tragic mistake, decided that his failure was absolute and chose a life of exile for his sins. Ever a just man, Hector’s last act as a Keeper of the Peace was to keep a protective watch over the refugees fleeing from Bilton to the human strongholds of the Empire.

Hector returned to Crisas as a self-exiled wanderer reduced to scavenging the desert for limited stocks of natural food and water, clothed in self-imposed shackles and markings to atone for his shame and hide his countenance. The goblins remain the rebuilt Bilton’s greatest threat, but Hector is a more fearsome goblin hunter still and, having resolved to die a hero’s death, may be Gubeg’s most dangerous enemy as he wanders the barren wastes seeking the perfect opportunity to expend his life in vengeance and thereby wash away his sins.

Hector is perhaps not so much a warrior as a belligerent force of nature, an aggressor among aggressors and a truly warlike man. Obsessed with combat and competitions, Hector defeated the strongest warriors of his native tribe before venturing further afield for more worthy foes, a pathway that inevitably took him, alongside many others of such an aggressive bent, to the “Holy Land” of gladiators – the Bloody Arena. The other warriors of Hector’s tribe had always spoken of the place in legendary tones, telling of its era of glory and the unequalled strength of the warriors there from across Aurelica. Regardless of the source of these stories, the sometimes ill-maintained arena filled with desperados, slaves, exiles, and general lowlifes did not and could not live up to such glorious expectations. Hector finally arrived at Crisas after some time to discover a far more commercial and cost- focused organization than he had expected.

A dream is a dream, however. Hector signed himself up, determined at least to conquer every challenger here as he had done for his own people. A new legend was born on that day, one in some ways more substantial than stories of the Bloody Arena’s might – for Hector soon after dominated all competition and made history as the Arena’s longest reigning champion!