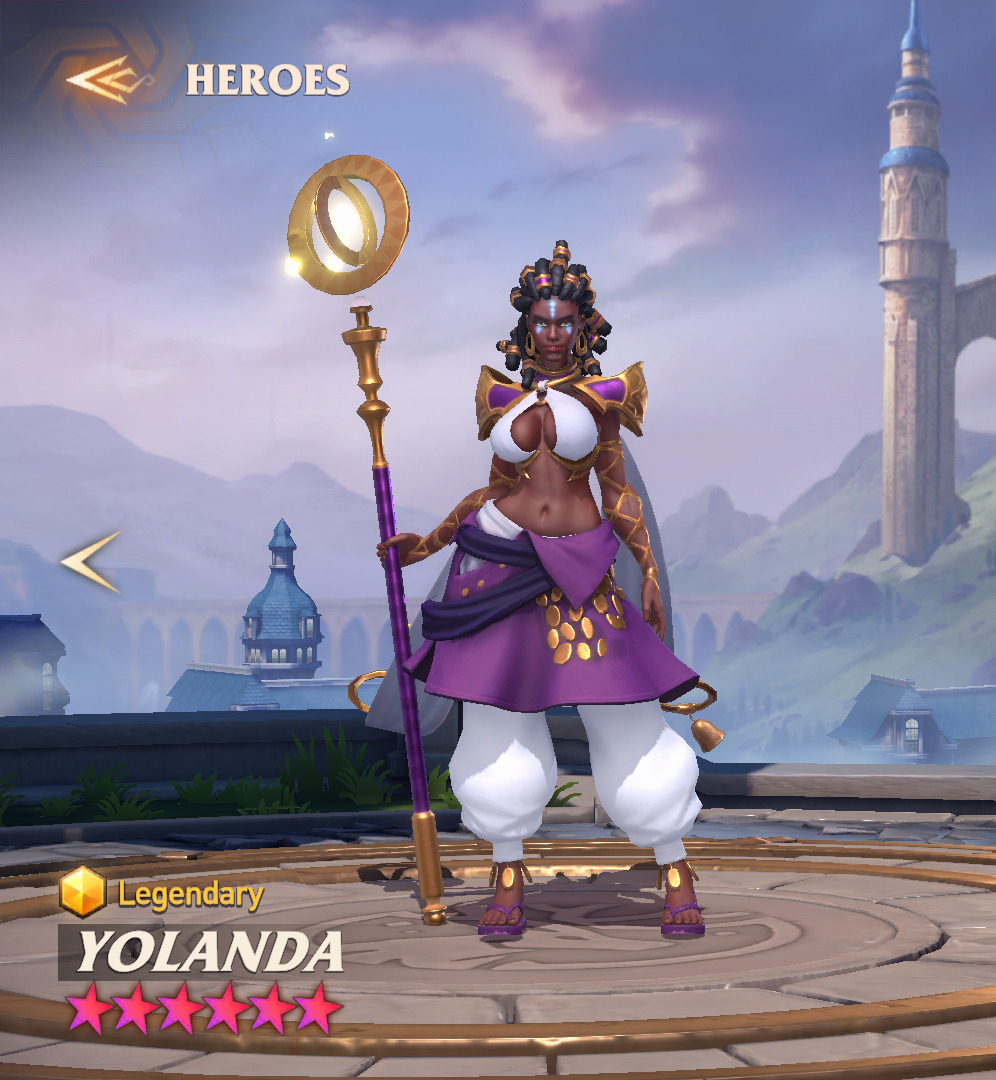 At the start of every round, grants Guard for 1 turn(s) to whichever ally has the lowest Health. When Guard is triggered or removed, enters a 4-turn cooldown.

At the start of every round, grants Guard for 1 turn(s) to whichever ally has the lowest Health. When Guard is triggered or removed, enters a 2-turn cooldown.

Upon taking massive damage, this character will not die, and some Health will be restored.

Deals 80% damage to an enemy and removes 1 negative effect from an ally.

Grants a bonus turn to a team member at the end of the turn as well as Immune and Attack Up II for 2 turn(s).

This character will not be affected by any subsequent
negative effects.

Shield of the Light

Grants a Shield to all team members for 3 turn(s). Shield strength scales with the amount of Health lost by each member. The shield greatly increases Crit. Resistance (50%).

Absorbs a percentage of damage taken as Health.

Grants a shield with strength equal to 30% of Max Health for 3 turns at the start of battle. Bonuses from multiple Sets do not stack.

Yolanda is one of the core members of the “Halo of Dawn” and Evelyn’s mentor, tasked with safeguarding the runaway adolescent by her mother Calienna, the Duke of Lasir’s former lover and a fellow “Halo of Dawn” disciple. Yolanda’s secretive “Halo of Dawn” organization was founded millennia ago at some point following the original War in Heaven where in Titan placed a protective barrier over Aurelica, rendering it inaccessible to the “chaos god”. The Halo of Dawn was founded by the descendants of the Titan’s servants with the sacred mission of safeguarding Aurelica from the continuing powers of chaos. Members of the Halo of Dawn are drawn from all races and kingdoms across Aurelica, each possessing a signature talent and a pure heart loyal to the organization’s sacred mission. Many centuries later, the Halo of Dawn is still working tirelessly behind the scenes to contain the “Dark One’s” attempts to pierce the Titan’s original barrier.

Yolanda and Calienna’s eacher in the Dawn, Eunice, was the most powerful sorcerers to have lived in Aurelica for generations, a power shared in part by her students. Yolanda has a particular talent for Light magic its power to affect the flow of time. Unfortunately, the actions by Duke Nicklaus at the Holy King’s Altar has convinced Yolanda that it may be too late for the Halo of Dawn to save the Empire and its nobility who are possibly already compromised by the dark. For her own safety, Yolanda has kept Evelyn in the Free Cities away from the Empire and her father, and has set her on a future path as the “cleanser” of the chaos plague.

The Halo of Dawn is a truly ancient organization. Even its chroniclers are unsure of exactly when it was founded or by whom, but there is little doubt as to its mission: to protect the peoples of Aurelica from the encroachment of the Dark One. The organization is well known and has been frequently called upon throughout the centuries to aid various kingdoms in their battles against the Dark. Most members of the Halo of Dawn work secretly behind the scenes to better perform their essential tasks. Some members, however, do choose to reveal their identities publicly, the most prominent of whom must be the Archmage of the Sacred Light, Yolanda.

Yolanda is one of the most powerful archmages in Aurelica, and probably its most powerful “Light” practitioner, a school of magic inherited from her mentor and well-placed to deal with the Dark.

Yolanda was born and raised a member of the Bantus many centuries ago on an entirely different continent. She was known as a light-hearted and inquisitive child, gifted in magic but unwilling to restrain herself to the animus magics practiced by her Paladin brethren due to her obsessive study of magic for its own sake. Her inquisitive nature as to its deep mysteries eventually led her to charter passage to the Hirschbuck Empire, where she enrolled in the Imperial Academy of Magic. Yet even their professors were unable to satiate her curiosity, and she began to explore other magical relics and notable mages around Aurelica. Her journey eventually led her to Sylvia, the mother of her apprentice Evelyn who, like Yolanda, shared a passion for research except, in Sylvia’s case, orientated entirely against the Dark One. The pair became inseparable.

Yolanda and Sylvia’s journey eventually led them to a small town on the outskirts of Talin that Sylvia suspected had been corrupted by the Dark. The pair were awoken from a troubled sleep to find themselves surrounded by aggressive villagers, that had been twisted somehow into darkling shadows of their former selves.

Yolanda realized that a portal to another plane lay open and exposed to the air within the village’s chapel courtyard. Invisible to the eye of the non-magic user, she could observe dark beams of poisonous energy snaking through the air, spreading a corrupting influence over all flesh. A blood-curdling scream came from somewhere deep within the Rift-world, and a pair of claws and demonic figure emerged. The young sorcerers knew their combat skills were about to be put to the ultimate test.

Yolanda deployed all her knowledge of the arcane to wound the demonic creature, which somehow shrugged off her attacks as if almost harmless, fully recovering from any blow of lightning or fire in seconds of regeneration. The Dark energy from within the portal appeared to be granting the demon renewed strength, and Sylvia barely managed to weave a protective enchantment of Light magic to keep the creature at bay. But time was running out. It was then that an overwhelming burst of Light magic enveloped the town, and burned the demonic creature to a crisp. Another mage? But who could possibly wield such magics? The new arrival dispelled the Dark around the village and returned the Rift back to whence it came. Thus was Yolanda inducted into the Halo of Dawn by her new archmage-mentor, and devoted to the same great work of saving the world.