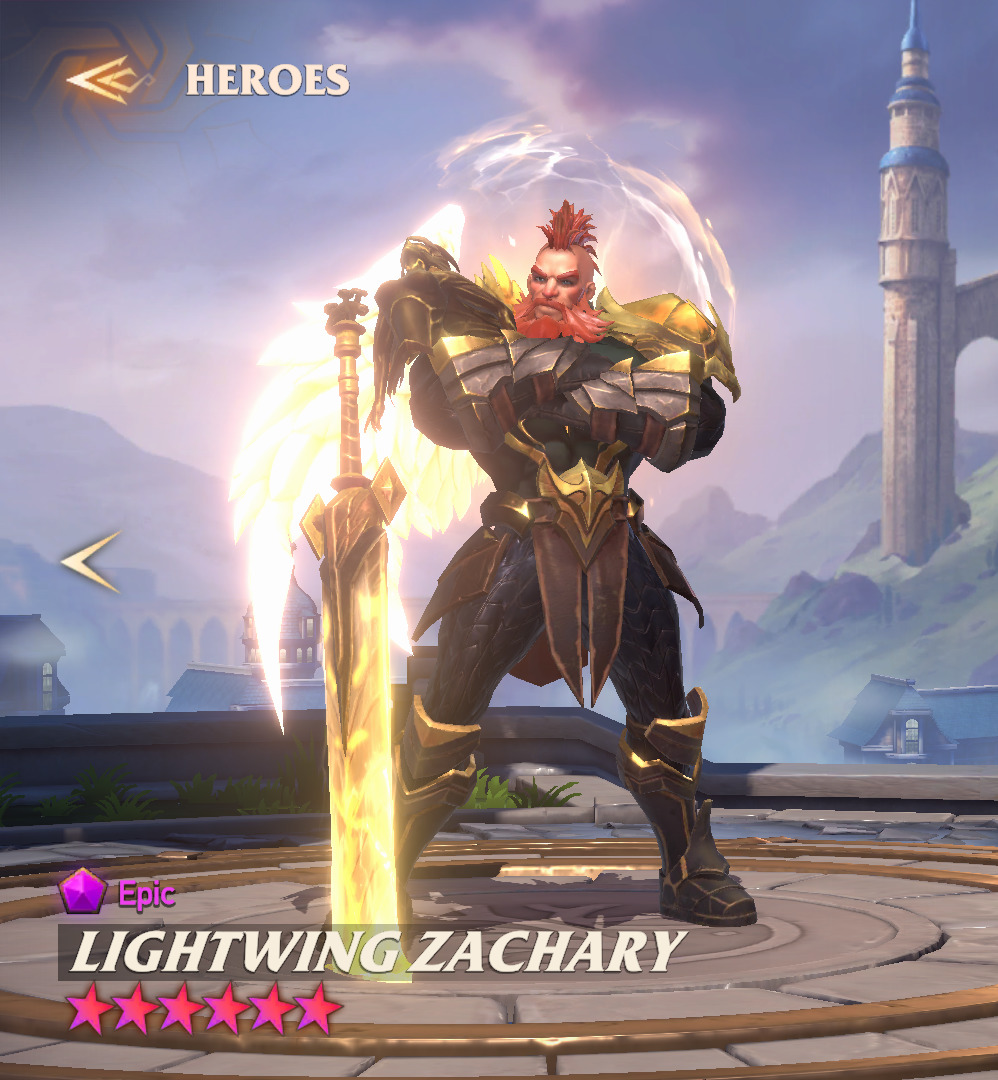 Note: Added the trigger limit and this ability can only get at most one extra turn trigger in any turn.

This character will not be affected by any subsequent
negative effects.

Deals 150% damage to an enemy, ignoring the enemy’s Defense. This attack cannot land a Critical Strike. If the enemy is killed, fully heals this character.

Zachary: wandering warrior, swordmaster extraordinaire and a figure of great note across Aurelica. Zachary’s relatively humble beginnings can be traced back to a tribe of “Snow Savages” living on the Titan Icelands steppes. A famine prompted Zachary to head for greener pastures at the age of 12, and his keen survival skills soon attracted the attention of Imperial recruiters, who made him a junior member of the Imperial Guard and then a commander, and contemporary of Thomas, on account of his many strategic insights. Zachary scandalously quit the Guard and left the Empire for reasons that, if known, are at the very least not common knowledge.

Zachary next turned up in the public eye fighting in the Bloody Arena of Crisas of all places, as the “red-headed warrior” who soon unseated the Arena’s reigning champion, “Helmar the Berserker”. Zachary’s next foray into controversy came two years later when he helped his friend and fellow gladiator Urzag, a slave of the Arena, to freedom.

Zachary turned up again eight months later as a captain in the Lasir Dukesguard. Zachary’s second stint in the army was also somewhat short lived. Zachary forged an unlikely friendship with Calienna, the Duke’s concubine, on a mission to escort her to the Imperial City and on account of which he found himself unexpectedly given the care of her daughter, Evelyn, just before the consort’s death under suspicious circumstances. Uncertain of who to trust amid his growing unease with the Imperial hierarchy, Zachary roamed the smaller cities on the outskirts of the Empire for a number of years with Evelyn, evading any attempts by the Imperial Guard to recapture the Duke’s daughter until the pair were finally granted a writ of safe passage by Emperor Leo I.

Zachary returned to the life of a wandering warrior after entrusting Evelyn into Yolanda’s care, but could never settle down in one place in or locate the savages from whom he had fled so many years ago. Although Zachary’s present life has made it all but impossible for him to marry, he is a surprisingly tender- hearted man, and has adopted a boy he found abandoned in the wilderness named “Elson”. The financial demands of his new ward has also forced  Zachary to offer his services as probably the most expensive mercenary in all of Aurelica, but this is in no way to imply that he is driven by greed. As all Aurelica knows, Zachary is more than willing to defend someone against injustice with a token sum of gold and, much more importantly, fine liquor.

The wandering mercenary Zachary is known far and wide by many in Aurelica thanks to his daring exploits, bravery in the field, and loyalty to his compatriots throughout numerous engagements around the empire, Free Cities, Crisas Desert, and beyond. As one of the most well known swordmasters of his generation, the legend of Zachary cannot be separated from his distinctive Chaos Blade, a familiar sight strapped to his back until the necessity of its use arises. But the Blade itself also has its own tale to tell.

Before the formation of modern Aurelica, there was a knight of an order that no longer exists who wielded the self-same Chaos Blade during the War in Heaven against the Dark One. Like many of the ancient artifacts in those days, the blade had been highly enchanted, and absorbed a portion of this warrior’s soul when he sacrificed himself for the Light during one particular bloody engagement. Unfortunately, the circumstances of the sacrifice and the corruption of the battlefield had also corrupted the energies around the blade as well.

The Chaos Blade was thus ruled by the darker angel of its twin natures for millennia following, during which it managed to corrupt countless other souls and brought tragedy and bad luck to many others including its latest owner – Zachary. Yet just as the Chaos Blade was damaging Zachary’s life, Zachary and his good character was affecting the blade in return, particularly in respect of those fragments of the ancient warrior’s essence within what was originally intended to be a Holy Blade of the Light. Zachary’s courageous death in defense of Evelyn and defiance of the Dark proved to be the spark that allowed the delicate interplay of forces internal to the blade to tip over in favor of its original Light essence.

The spark was lit. The ancient Light-aligned enchantments within this millennia-old relic spring to life in protection of Zachary. The positive magics within the blade worked to protect Zachary’s dying body from the effects of death as the ancient warrior spirit reached out to him within the dream-state between life and the Beyond.

Zachary eventually opened his eyes again. He was alive, although he did not know how, imbued with a renewed power that vested his body with a faint ethereal light. The ancient warrior was now faintly visible behind Zachary as a pair of golden wings, soul restored and Blade of Light recovered. Now Zachary fights with even more vigor and determination knowing that a faithful and true ally ever stands ready by his side…