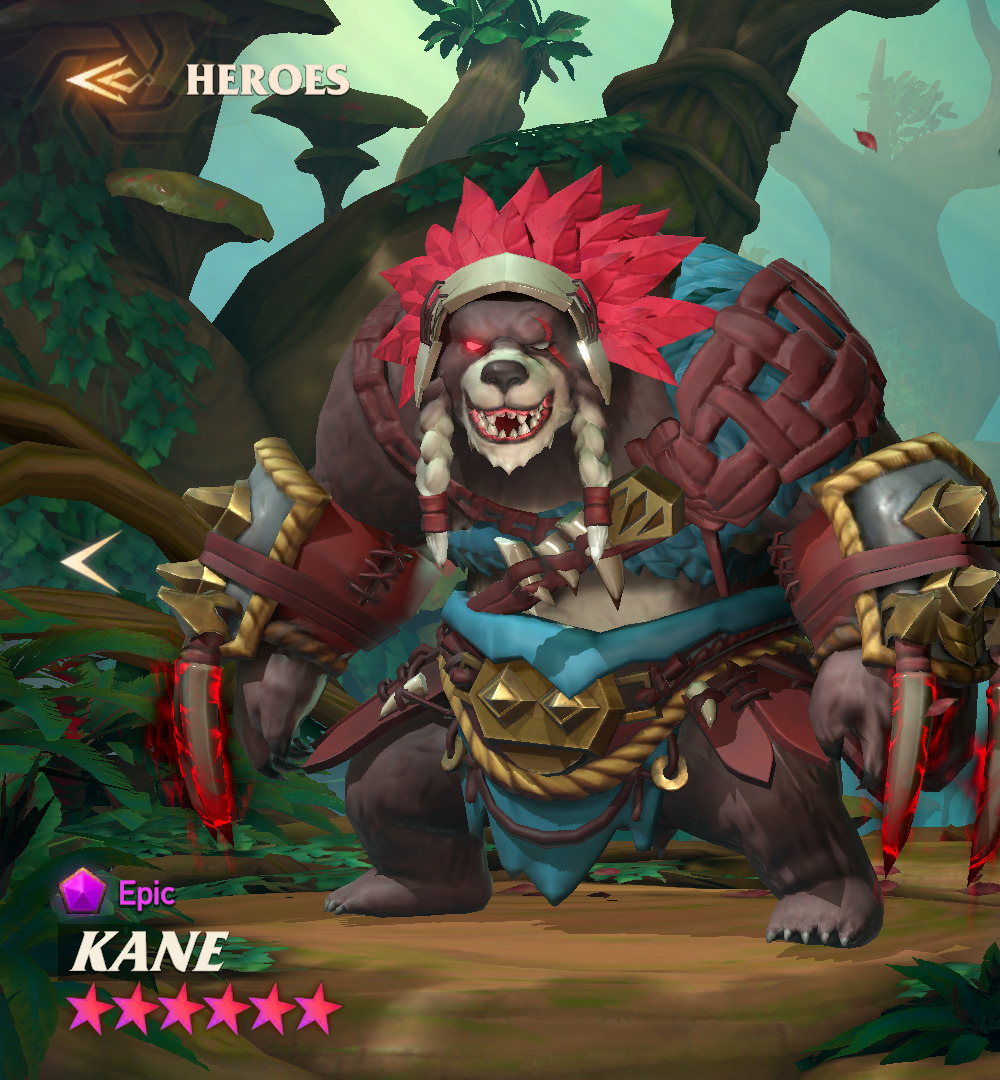 Absorbs 15% of damage taken by an ally. If this character starts the turn with less than 50% Health, they absorb 50% less damage.

Absorbs 20% of damage taken by an ally. If this character starts the turn with less than 50% Health, they absorb 100% less damage.

Deals 2 to 6 strikes of 50% damage to an enemy. The first strike will remove a positive effect while subsequent strikes have a 30% chance to remove 1 positive effect.

Deals 100% damage to one enemy and applies Defense Down II for 2 turn(s).

Grants a shield with strength equal to 30% of Max Health for 3 turns at the start of battle. Bonuses from multiple Sets do not stack.

Kane is centuries-old and the last known surviving pandaran warrior. Most of his clan have been killed in one conflict after another against other jungle inhabitants or their great war against elves. Bloodbeast Jungle has always been an unsettled place even before the establishment of the Well of Desires, Soulplunder’s headquarters in the Jungle. Indeed, the Jungle has been home to dark chaos energies for centuries, a corrupting power that the pandarans have been mercifully protected from thanks to their age, wisdom, and natural fortitude.

However, Helmar and Valeria’s arrival to the jungle seems to have tipped it into much greater violence, and Kane has been heartbroken to witness many of his noble comrades take up arms against each other and the elves, a conflict his people have always argued against. Helmar’s dominance over the jungle has compelled all clans, including the pandarans, into all-out war against the elves in which most of Kane’s comrades have lost their lives.

Kane can no longer stomach war and pointless conflict, and yet is honor-bound to continue for his clan’s glory.

The Bear Clan has, with the other beastmen, protected the peace of Bloodbeast Jungle alongside the centaurus, Wolf Clan, and the other races for generations, as led by the mighty Kane, the Chief Elder of the Bear Clan after ascending to the position on the former chief’s passing. This nonetheless rather young elder certainly discharges the duty of protecting his fellow pandarans with courage and valor in battle although his leadership style – brash and headstrong – often leaves much to be desired from his fellow clanfolk, a fault which has brought Kane into increasing difficulty as the years of his eldership has progressed. The gruff, bad tempered Elder exemplifies some of the worst curmudgeonly stereotypes of a typical Pandaran warrior with the exception of a possible soft spot for his childhood friend and dryad Cece, who may be counted upon to draw the rare sweet expression from the Elder’s lips.

Kane looks at the world in a very strict and very specific hierarchy of respect and authority, of which his own dignity and that of his clan takes chief importance. Indeed, Kane has often had occasion to save his fellow warriors in battle against the Bonebreakers and other threats to the forest with great courage. As to the clan’s more minor “domestic” matters, as long as others do not touch Kane’s local supply of honey – under pain of a beating – then he is very happy to allow the clan’s affairs to
practically govern themselves.

Kane’s somewhat selfish and territorial actions have also alienated a few of the Bear Clan’s closest allies, including his penchant for leaving innumerable claw marks on trees that he encounters, a technique both to mark out his territory and also scare away potential Bonebreakers, the hated blue-skinned enemies of the Bear Clan. Unfortunately for Kane, many of the elves, dryads, and other species view these actions as tantamount to sacrilege upon the great jungle, a habit that Kane absolutely refuses to change despite his friend Cece’s many private urgings to the contrary.