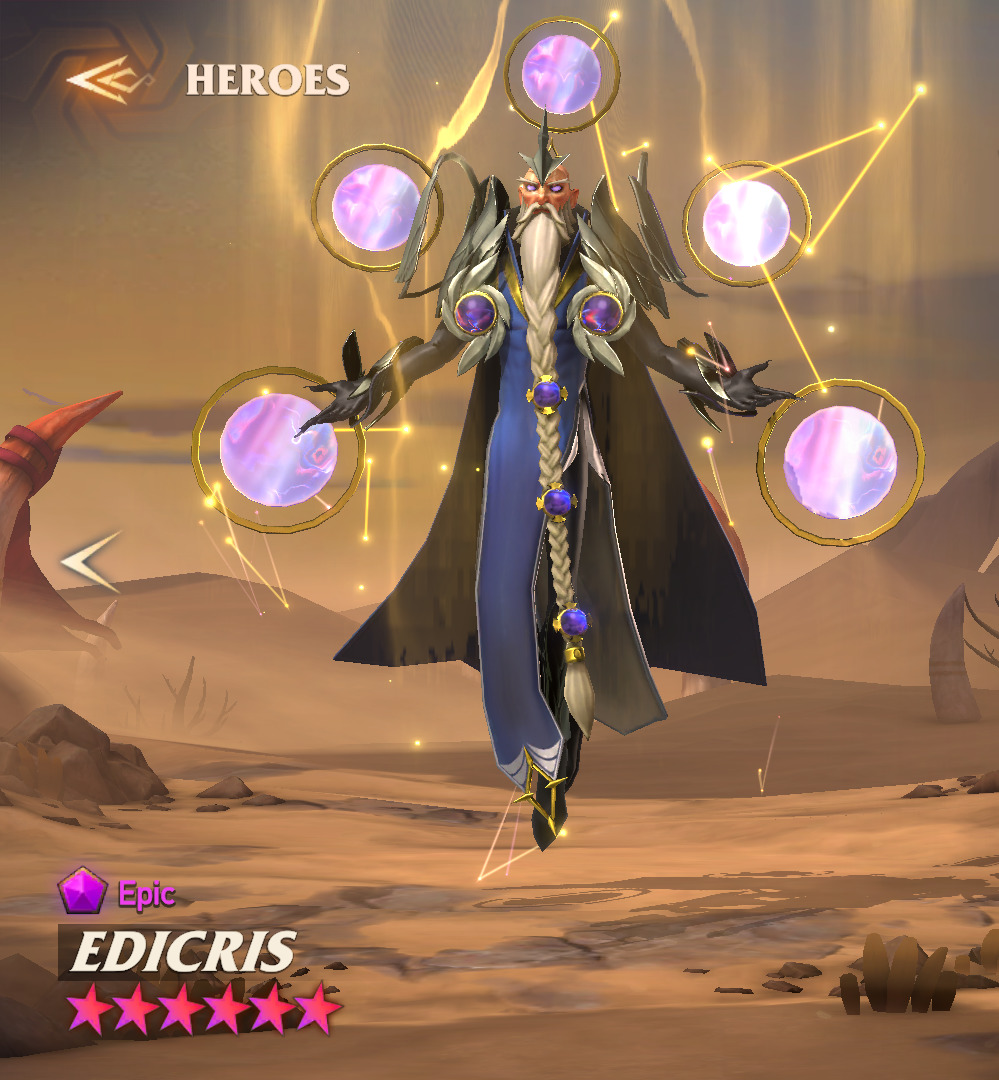 Attacks have a 35% chance of launching a bonus attack or 35% per positive effect removed (chances do not stack). Bonus attacks will also deal 60% damage to all enemies and remove 1 positive effect from the target (up to 2 times per round).

Attacks have a 35% chance of launching a bonus attack or 35% per positive effect removed (chances do not stack). Bonus  attacks will also deal 60% damage to all enemies and remove 1 positive effect from the  target (up to 2 times per round). Grants 1 stack of Ability Ineffective at the start of battle.

Deals 100% damage to an enemy and removes 1 of their positive effects.

Grants a bonus turn at the end of the round as well as Attack Up and Focus Up II for 1 turn(s). Removing any positive effect from an enemy extends this character’s Stats Up positive effects by 1 turn.

Deals 120% damage to all enemies, removes 1 positive effect from the target, and grants Resistance Up II for 1 turn(s).

A popular refrain is the Empire is so corrupt now that its alchemists could probably find a way to turn gold into copper, and there is perhaps no institution that exemplifies this corruption more than the ironically-named “Holy Citadel” although this reality is undoubtedly not widely known outside of magical circles. The Holy Citadel has been granted a supreme monopoly over the Light school of magic by edict of the Emperor, and claims to represent the “true god”, by which belief system shall blessings flow to the people and an orderly system of government ensue.

The High Maintainer of the Holy Citadel, the Archmage Edicris, may play the part of a believer to the crowds, but privately has declared the myth of the “true god” a sham and all such beliefs merely tools by which to manipulate the masses. Indeed, Edicris has little respect for any supposed gods or celestials, and regards even the great Titan of old, whose existence may perhaps be verified in some manner, as merely a heretofore undiscovered species of unusually powerful creatures, and by no means a god. If Edicris has any lofty aspirations for humanity beyond his own personal gain, it is perhaps that he and other magical users may perhaps grow into beings equally as powerful as the Ancient Titan through their mastery over magic.

To Edicris, the Light school of magic lies at the foundation of all the other schools, and the powers contained within should prove sufficient to transform humanity into gods of their own making. Edicris actually believes this dogma of the Holy Citadel, and has attempted multiple magical experiments to push the boundaries of what has been considered possible for the powers of Light magic. Thus have Edicris and the Holy Citadel failed to appreciate the essential duality of Light and Dark magic and that any attempts by the Citadel to enhance the power of the Light in our world has also served to magnify the ease with which its counterpart, the Dark, can be accessed by Dark-aligned sorcerers. Edicris’ magical experiments have own much of the deep earth with toxic fountains of Dark magic readily accessible to the likes of the Soulplunder cultists.

The rise of Soulpunder and the terrible loss of Pegasus has only just nudged Edicris toward the potential fallout from his foolish actions. The tide is even now beginning to turn against the Empire. He has received recent notice from his Marksmen Commander that the people of Lasir and the Soulplunder cult have organized to turn the Starlight Altar in the Astral Forest to the Dark and that Lasir is ready to rise up against the Empire at a moment’s notice from the Duke. Edicris has summoned a cabal of Light mages from the Holy Citadel to put a stop to such designs at the Astral Forest, and has already begun arresting seditious Lasir and cultist suspects within the Empire’s borders.

The Archmage of the “Holy Citadel” Edicris’ considerable standing in imperial society is amply reinforced by his extraordinary knowledge of Light Magic and his apparently tireless devotion to the Goddess of the Light. As Hirschbuck Imperial historians or, to their detractors, propagandists, are wont to tell, the Hirschbuck Empire possesses the oldest and most distinguished School of Light Magic in the Order of the Holy Citadel and the most fervent believers in the Goddess. None of this explains the origins of the Citadel, nor why it appears that the Order of the Sacred Fire of Lasir and the Holy King Carlos’ battles against the Dark seem to predate the establishment of the Citadel by centuries.

In any case, there is no denying that this school of talented Light mages has made exceptional advances in the study of Light Magic in which Edicris must probably be considered their champion, despite the fact that he – unlike other mages of the Light – appears to cast spells exclusively through a reflective prism artifact rather than, as do most of his lesser colleagues, his hands. So powerful are Edicris’ spells and so unquestionable is his knowledge of the Light that such minor oddities will most likely go unmentioned.

The truth of the matter is somewhat less inspiring: Edicris cannot in fact channel Light magic without the artifact. It is not known whether this is due to his total lack of personal piety or internal skepticism that any such Goddess exists versus his own view that the Light is simply a fundamental magical force of nature without any underpinning entity. As Edicris is fond of saying, and as appropriate to his role as the Archmage of his Order, the Light can save anyone and this, in typical Edicris fashion, contains a double meaning: the Light can save anyone because it is the most powerful fundamental magical force and essentially capable of anything given sufficient magical training and understanding. Edicris’ skillful research into the arcane details of Light magic and prism use, which strongly enhances his powers, has brought him to the very pinnacle of any Light mage in the current age of Aurelica.