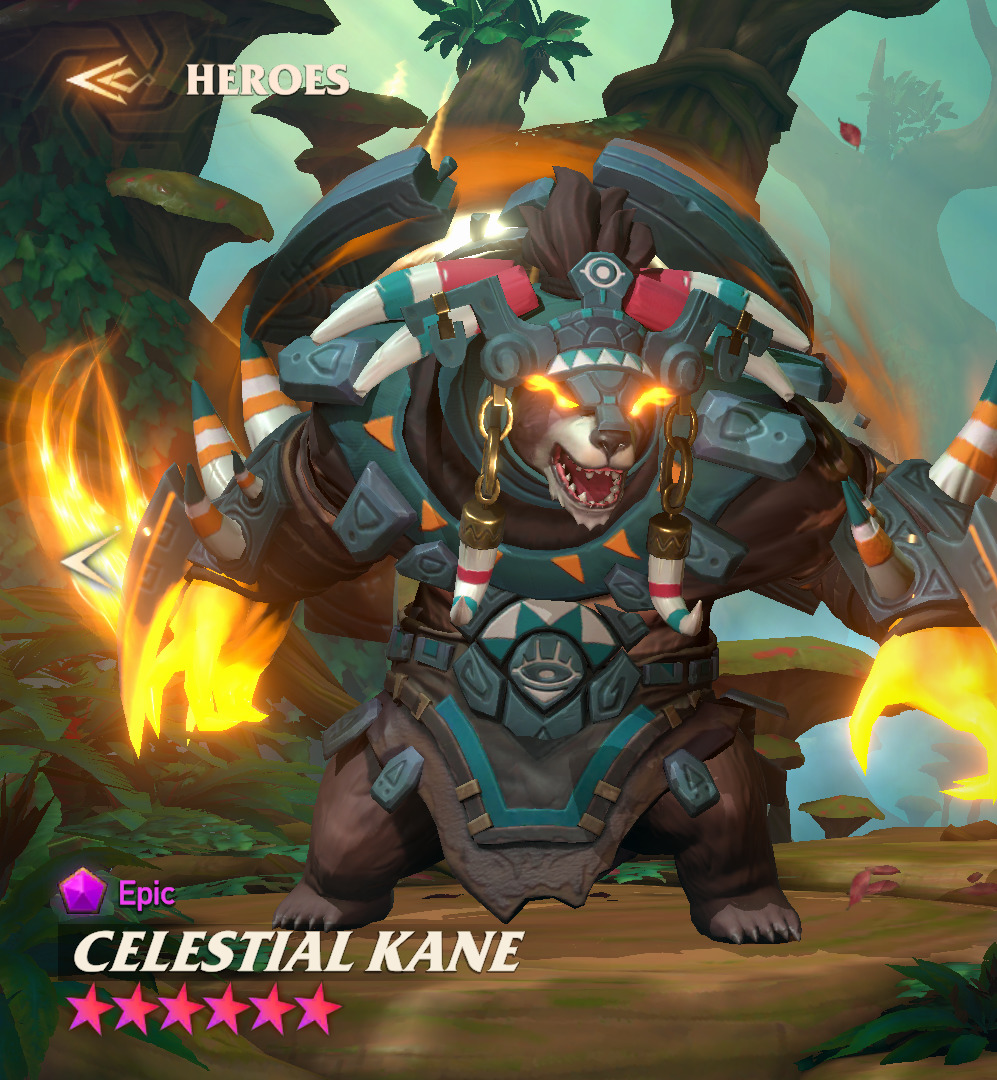 When this character is attacked, removes 1 negative effect from each of 2 team members. Can only be triggered once per turn.

Removes 1 negative effect from all team members when this character is attacked. Can only be triggered once per turn.

Deals 2 to 6 strikes of 30% damage to an enemy. Each strike heals this character for 4% of Max Health.

Deals 100% damage to all enemies and grants Invincible to all team members for 1 turn(s).

This character will not take any damage.

Kane is centuries-old and the last known surviving pandaran warrior. Most of his clan have been killed in one conflict after another against other jungle inhabitants or their great war against elves. Bloodbeast Jungle has always been an unsettled place even before the establishment of the Well of Desires, Soulplunder’s headquarters in the Jungle. Indeed, the Jungle has been home to dark chaos energies for centuries, a corrupting power that the pandarans have been mercifully protected from thanks to their age, wisdom, and natural fortitude.

However, Helmar and Valeria’s arrival to the jungle seems to have tipped it into much greater violence, and Kane has been heartbroken to witness many of his noble comrades take up arms against each other and the elves, a conflict his people have always argued against. Helmar’s dominance over the jungle has compelled all clans, including the pandarans, into all-out war against the elves in which most of Kane’s comrades have lost their lives.

Kane can no longer stomach war and pointless conflict, and yet is honor- bound to continue for his clan’s glory.

The road of an Elder can be a long one indeed, and Kane the Elder of the Bear Clan has endured much on his development into an outstanding and well-respected leader, even if his temper still leaves something to be desired.

The legend of Kane’s bravery was founded most vividly during the Dark’s assault on Sylvan Forest several decades ago, a major engagement in which Kane led a large band of pandaran warriors in combat against the Chaos Beastmen in an engagement that spanned day and night. Yet the hordes of Chaos Beastmen seemed endless, and there seem to be no decrease in the enemy’s number even as one after another of Kane’s brother’s fell by sword and spear. Kane realized that his clan would eventually lose this battle and with it, the flower of the Bear Clan’s warrior youth. It could not be. Kane ordered most of the brothers to turn back while he held a narrow pass a little further on into Clan territory with a smaller group of elite warriors. Kane roared at the approaching Chaos Beastmen with all his might, and yet could not ignore the fact that for once in his life his physical body and spirit were both truly exhausted as the Chaos Beastmen began yet another fresh assault.

Kane looked around and realized that he was alone, his last brother felled by an arrow. Many of his best friends lay among the Fallen, and in his pain and anger he had only the solace that he would soon join them and that he had completely fulfilled all the duties expected of an Elder. He prepared himself to meet his ancestors.

Kane took a moment to steady his weary body and sat to pray to his ancestors… But the wave of approaching Chaos Beastmen never came. Kane had not realized it yet but their valiant engagement had given enough time for his fellow warriors to summon help from the other beastmen of the Jungle. Kane felt a hand on his shoulder as if an ancestral presence had arrived to provide comfort and acknowledgement. He openedhis eyes, surprised to find the Chaos Beastmen stumbling over themselves, unsure whether to continue the assault against the large army who had just arrived before. Kane rose up from the ground, shrouded in a new, strange ethereal aura. The fatigue, aching joints, and physical pain was gone. Kane had somehow been “Reborn”. He immediately led the charge against the now fleeing Chaos Beastmen, who were successfully repelled from Sylvan Forest in a decisive engagement that brought peace to the area for several decades. Kane thereafter became known by many among the Sylvan Forest as “Kane the Reborn”.