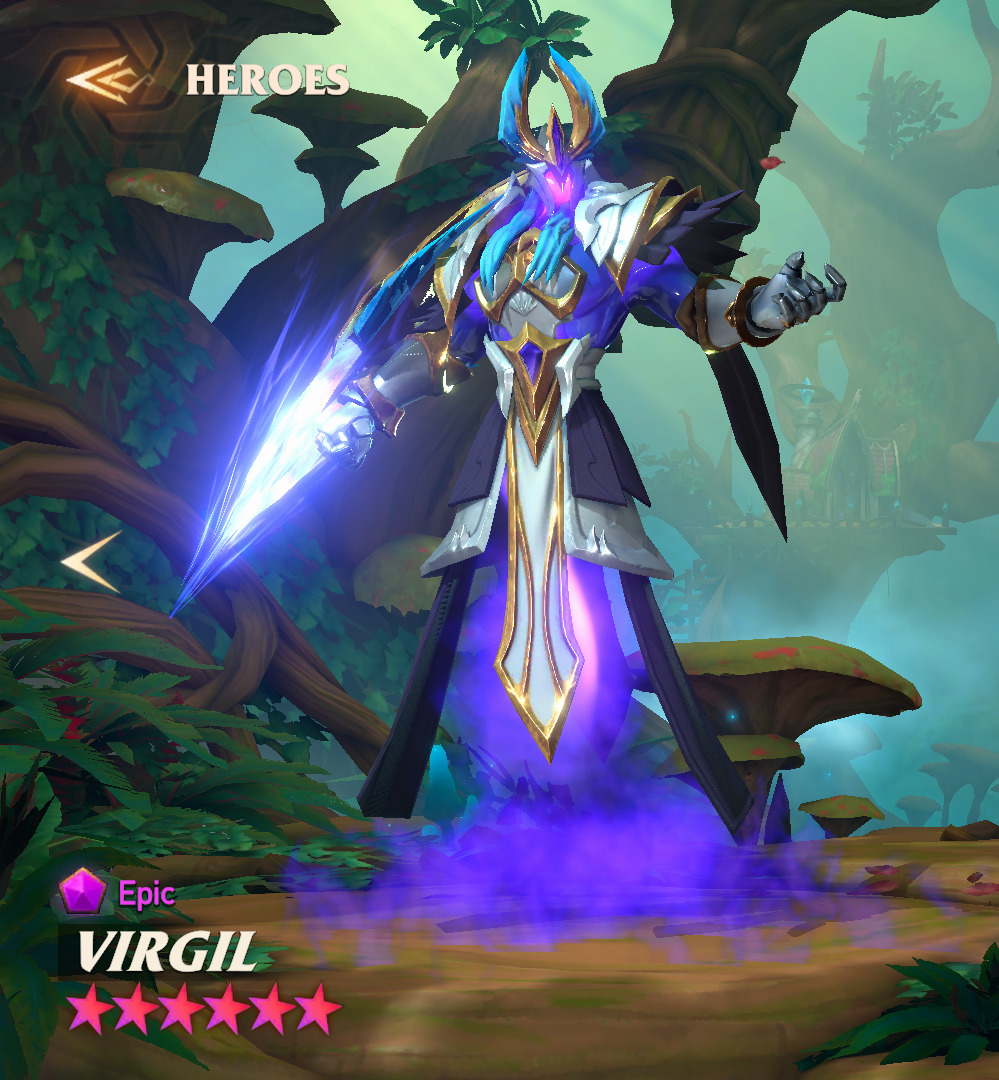 Deals 100% damage to an enemy and removes 1 of their positive effects. Grants 1 Rage.

Deals 180% damage to all enemies plus 100% damage if the target is affected by Silence.

Deals 120% damage to all enemies. Applies Silence to targets for 1 turn(s) and grants 2 Rage.

Attacks have a 20% chance to Stun the enemy for 1 turn.

Virgil, the former captain of the defunct Elven Guard, was a close friend of Prince Celeborn. Today, though he only has armor made of Arcane Energy, he still guards the Astral Forest with strength and pride.

In the first Battle of the Blood-Moon, he guided power from the Forest Altar into his body; taking in energy until his body wasn’t able to take in any more. Once his body was full of this Arcane Energy, he rushed into the demon horde and unleashed the power with an Earth-shattering explosion, ensuring victory for the elves. Since then, his heroic actions have become legendary -and he is viewed as one of the greatest protectors in the history of the forest.

Virgil the Phoenix King is the right-born
Elvish King over Phoenix Mountain and subsequently Sylvan Forest following the destruction of the ancient elvish island in the westernmost part of Aurelica after the Great War and the calamities that then unfolded. Phoenix Mountain was once host to the greatest of the elven cities as its artificial battlements were founded partially by the intervention of the Seven Sceptered Gods themselves in order to provide an impenetrable guard over a powerful Chaos Rift located deep under the mountain.

This, the best and most easily protected of the various Rifts across Aurelica was not so well-shielded as to prevent dark whispers from reaching the ears of some of their elven mages desirous for more power. A select few eventually came to believe the Chaos Rift had in fact been misinterpreted as demonic whereas it in fact contained a pathway to an alternative source of even more powerful magic. The cabal, who were eventually twisted into what today are referred to as the dark elves or fallen elves, somehow figured out a way to expand the Rift and thus unleash hell upon the elves’ impregnable citadel. The insurmountable fortress, protected by battlements reaching in some cases a mile-high, was conquered and destroyed from within.

Virgil acted quickly at the moment of crisis, launching a powerful counterattack that successfully eliminated most of the initial members of the guilty party as he brought the full weight of elvish might against the remaining transgressors, who fled for their lives. Yet even this effort proved too little, too late. Dark demons and other terrible entities began to spill in from the enlarged Chaos Rift, leading to an endless uphill battle that Virgil quickly realized could never be won. Virgil was forced into a desperate act. He imbued himself with untold power as he unleashed an elemental implosion within the mountainous vicinity of the Chaos Rift, sealing it shut by thousands of tons of collapsing rock and, unfortunately, the death of his own physical body. The elves had finally won their brief battle against the Dark One, but at a catastrophic cost – their mountain citadel lay in ruins, the Chaos Rift crushed under rock but still oozing contamination into the very stone. With a heavy heart, the elves prepared for their an inevitable eastwards migration into Sylvan Forest.

Mytheasia, the most talented of the elven mages, managed to catch Virgil’s spirit before he entered the Great Beyond and reincarnated him into a magically-constructed body to which she presented the Spear of Enlightenment and a suit of enchanted armour crafted by the finest elven smiths to allow Virgil to continue in some corporeal formed. Virgil was thus able to lead his people through the difficult march to Sylvan Forest in some sense and, after overseeing the successful establishment of the new “Astral Kingdom”, finally entered a long slumber within the Starlight Altar, the powers of which Mytheasia hopes will gradually rebuild his body to the point where he can once again take his rightful place upon the throne of the Elven Kingdom. Mytheasia and the elves still awake the return of their once and future king.