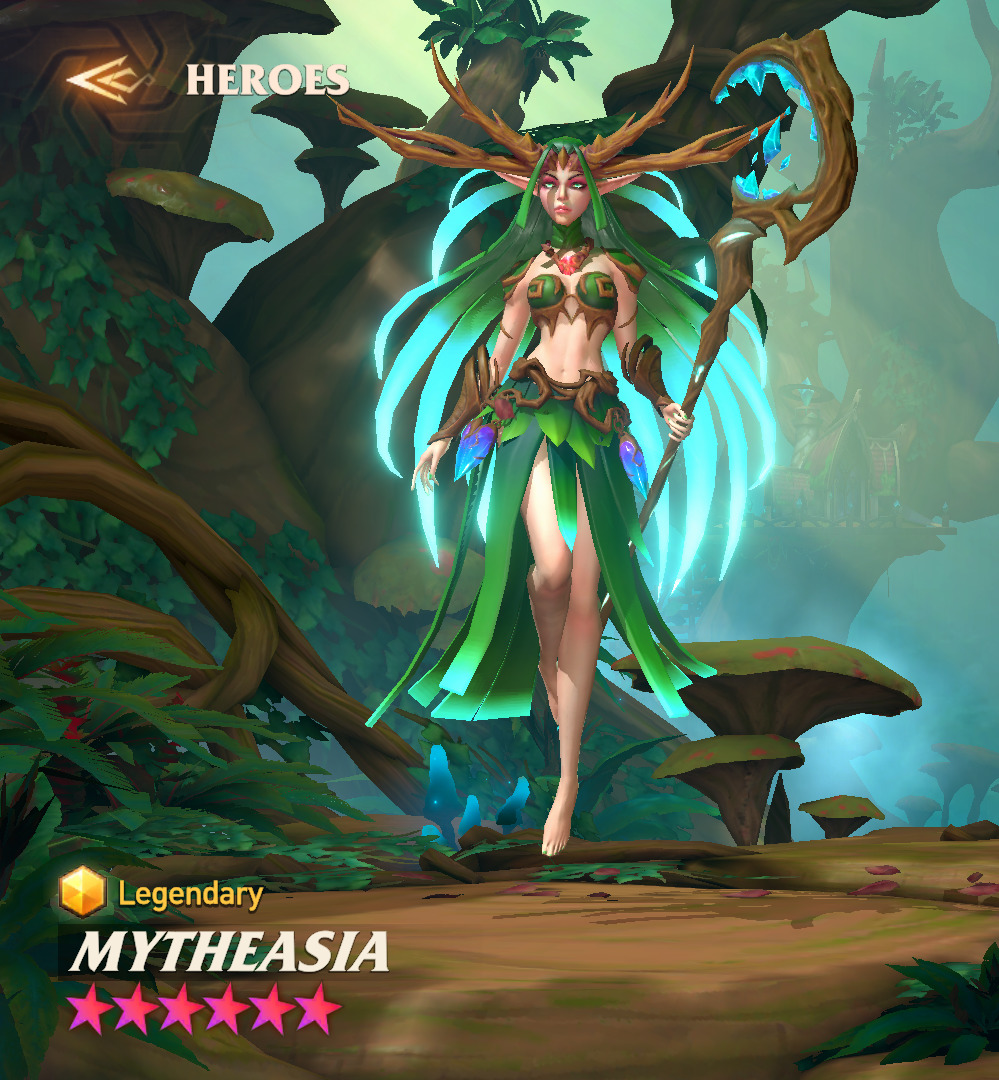 The abilities of all team members recover 5% of Max Health if the target has a positive effect.

The abilities of all team members recover 10% of Max Health if the target has a positive effect.

Deals 50% damage to an enemy and grants a Shield for 2 turn(s) to the ally with the lowest Health. Shield strength scales with this character’s Max Health.

Heals an ally and removes all negative effects from them. Healing scales with this character’s Max Health.

Heals all team members and revives all slain allies. Healing scales with this character’s Max Health. Cooldown is extended by 2 turn(s) for every ally revived.

Converts 50% of healing provided into a shield that lasts for 1 turn.

Mytheasia is a living legend, the “guardian angel of the Astral Forest”, High Priestess of the elves and protector of the Starlight Altar due to her mighty magicks and devotion to her land. In reality, Mytheasia is merely an elven mage although far advanced in wisdom beyond her peers due to her frequent conversations with their ancestral spirits through the Starlight Altar, and who have given her access to mysteries and forbidden arts beyond the understanding of most mortals. Such mysteries may perhaps hold the key to the Forest’s future…

Any elf today would no doubt identify High Priestess Mytheasia as the strongest magic user amongst her people and their greatest living leader. Mytheasia has devoted her life to the elves and indeed all races of Aureliсa more broadly with her prodigious magical powers, kindness, compassion, and charisma. She has served for years as a custodian of the Deep Magic of the greatest elven sorcerers and guide to her people through many difficult periods.

Mytheasia was marked from birth by the Protector Goddess of the elves according to legend, who anointed her forehead with a horned mark representing the Spirit Tree – and a token of the Goddess’ blessing upon her. Whether it is for this reason or not, Mytheasia has always enjoyed far greater access to sources of natural magic then her peers, as well as a rare skill to communicate with and command the plants and creatures of the forest.

The elves underwent a period of terrible suffering during their long campaign against the Dark One, culminating in an elven victory over the forces of the Dark at the Battle of Phoenix Mountain. Their homeland destroyed, the elven “Phoenix King” Virgil and his closest advisor Mytheasia made the decision to migrate eastward to Sylvan Forest. The forest’s new masters had to immediately decide what to do with the existing inhabitants of the woodlands and other refugee races from the War Against the Dark, including numerous beastmen who faced their own struggles. The decision was made to leave East Sylvan to the beastmen, which became known as “Bloodbeast Jungle”, who agreed to help protect the forest from any further incursions from the Dark, whereas the elves would settle into West Sylvan Forest, which soon became known as the “Astral Forest”. Trouble began almost immediately afterwards as the servants of the Dark sowed discord amongst the new beastmen arrivals, eventually turning many into twisted versions of their brethren – the so-called “Chaos Beastmen”. Mytheasia made the decision to risk elven lives to prevent the Dark from gaining a foothold in the nearby Bloodbeast Jungle, but the elves were badly stretched by a secondary incursion of dark elves. The Astral Guard eventually prevailed, but the conflict had taken a terminal toll on Virgil the Phoenix King, who fell into a deep slumber within the Starlight Altar. Elven leadership therefore passed to the High Priestess Mytheasia, who now had the dual responsibilities of chief sorcerer and leader of the elves.

Mytheasia used her knowledge of arcane sorcery to construct a great artifact in East Sylvan – the “Moonwell”, with waters to heal the forest from the long war against the Dark, and which gave rise to East Sylvan’s more common name today – the “Astral Forest”. The elvish population, decimated by the war against the Dark and terrible losses at the Battle of Phoenix Peak, began to recover amid the longest period of prosperity and peace their people had yet known. The younger elves know little today of the horrors their parents once battled, now more than a millennia in the past. As Mytheasia surveys the prosperous elvish state, in which her younger brother Antinua is also a major leader, she cannot shake the feeling that the days are coming when her people will need to summon their Phoenix King once more from the Altar.